Here are a couple example militaries from the various StarCluster Settings. First The SaVaHuTa Navy from the Classic Setting - SaVaHuTa is a huge military-Economic alliance with many worlds in many star systems 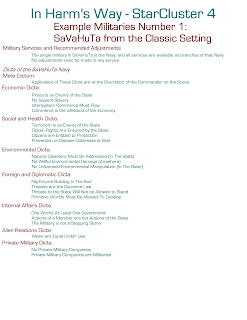 Second, the Rasi SWAT Police from The Necklace Setting - The Necklace is a gigantic breathable gas torus in space around a neutron star with a billion mile long gravitic ring-river looping through its immense volume. I have a bunch more here. 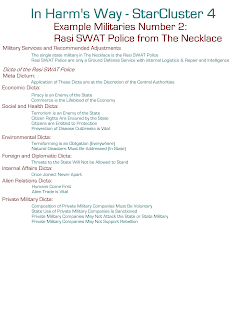 Posted by clash bowley at 1:35 PM No comments: Links to this post

Working on Military Dicta for In Harm's Way: StarCluster 4 today! A Dictum is a saying which encapsulates an important principle. For designing a military in IHW:SC4 you would choose which Template Trees work in your setting, then choose a number of Dicta to define the reasons a military does what it does. Some example Dicta:

Sapient Slavery is forbidden within the state. Any attempt to subvert this concept by importation of slaves or institution of slavery in any way must be prevented and punished by the military.

Terraforming must be licensed and controlled, with proper safeguards applied.

One State, One People

There is only one state. The existence of any polity considering itself outside the state is strictly forbidden, and any attempt to establish such will be rigorously opposed.

Primitive Worlds Must Be Allowed To Develop

Technologically retarded worlds must not be interfered with if they are to develop properly.

Posted by clash bowley at 10:17 PM No comments: Links to this post

For In Harm's Way - StarCluster 4, we have re-imagined the military from the ground up. AS Klaxon said, "with space travel, the Space Navy will eventually encompass everything else. The Navy == the military." So we divided that giganto-navy up by function into six internal services:

There are 5 branches of DSS: Fighters,Cruisers, Fleet, Scout, and Specwar
Fighters are the small, highly armed but replaceable ships dispatched in swarms to destroy opposition
Cruisers are those ships typically dispatched in small squadrons
Fleet are the big ships, held for a smashing blow
Scouts are small ships sent out to explore and reconnoiter
Specwar are the Special Warfare ships, sent out to do irregular missions

There are five branches of EF: Drop Troop, Vehicles, Infantry, Recon, and Intruder
Drop Troops are the highly armored shock troops dropped from orbit
Vehicles are grav vehicles of various sorts, including drones, suitable for any environment
Infantry are those who take and hold ground
Recon are the ones how find out what is where
Intruders are those who go beyond enemy lines and disrupt, destroy, and blow shit up

There are five branches of SDS: Defense Pilot, Line, Stationer, Military Police, and Sapper
Defense Pilots are the small, highly armed but replaceable ships dispatched in swarms to destroy fighters
Line are the big defensive ships built to protect against system invasion and intrusion
Stationers are the stationary defenses built to protect resources and worlds
Military Police keep everyone in line
Sappers lay out minefields and other passive defenses

There are five branches of GDS: Aerospace, Surface Craft, Militia, Artillery, and Enviro Troops
Aerospace are the swift and agile aircraft that protect the skies
Surface Craft are the ground and/or water based craft that fight invaders and intruders
Militia are defensive troops for holding ground
Artillery are large rail guns and missiles used in point defense
Enviro Troops are those trained to work under the specific environmental conditions of the world

There are five branches of IS: Humint, Sigint, Analysis, Osint, and R&D
Humint are the field agents, working under cover
Sigint are those who intercept communications and encrypt and decrypt as needed
Analysis are those who collect, collate, and route information where needed
Osint are those who use available public resources to inform on culture and disseminate propaganda
R&D researches and develops weapons, vehicles, armor, ships, and anything used by the other services

Posted by clash bowley at 9:20 AM No comments: Links to this post

It's decided. I am doing In Harm's Way: StarCluster 4.
Posted by clash bowley at 9:34 AM No comments: Links to this post