Every designer is faced with choices all along. If they put everything a GM could need in the core book, that book becomes huge and too intimidating. If they keep the core book tight, they limit the game's applicability, scale, and/or scope. If they put out a bunch of supplements to cover the gaps, they are accused of facilitating the supplement treadmill. if they don't put out supplements, they are perceived as not supporting the game. If they revise a game, they are decried for changing things for the sake of change. If they don't put out a revision, they are vilified as old-fashioned and clunky. The list of Damned-If-You-Do-and-Damned-If-You-Don't choices goes on and on.

If a company puts out a lot of supplements, then people must be buying them, otherwise they would stop releasing stuff. If you don't want to buy these supplements, don't buy them. If enough people feel the way you do, then the treadmill will stop, because there really *is* no treadmill. The power to move that rolling walkway comes from your legs.

Here's the latest illo for Volant. Once again, I'm trying to loosen my style, so it looks less like a photo, and more like a painting. 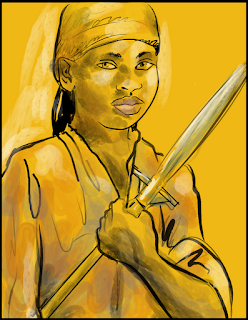 Posted by clash bowley at 9:31 PM No comments:

Last night had a great game in the phase two alpha playtest of Volant. The player characters had not been invested in things til last night, so I upped the religious ante. Now they are fully invested, and care DEEPLY about what is happening. Love how sometimes things just CLICK like that!

Also had another great session today in my IHW Napoleonic naval game over IRC. Good stuff all around!
Posted by clash bowley at 5:21 PM No comments:

My son Klaxon is working on four things for me currently:

The spreadsheet tools are almost finished, and will be available for free download. The documents will be sold in PDF form. I'm uncertain what to call them - suggestions are welcome!

The reasons why we have the duplication is that StarCluster 3 is a game about the civilian side of the Cluster, while In Harm's Way: StarCluster is a game about the military side of the cluster. As such the ship construction - while compatible - is completely different. What is important to the military is totally unimportant to civilians, and vice-versa. Civilians don't need drop tubes or particle accelerator weapons, and the military doesn't need conservatories or swimming pools.

I created several example ships for both games which are in the main books, and those size ships will not be duplicated. I'm leaving which ships are created up to Klax.  Question - would it be better to sell the ships separately, one to a PDF, or all together?

Got the Print Version of Pigboats

I got the print copy of In Harm's Way: Pigboats today. I must say the cover is far more impressive in person than on the computer. I was surprised by how effective it was. The interior illustrations and maps came out very clear as well. As always, I am pleased with the printing from Lulu. Now I'll be able to use it running the game on IRC! :D

In Harm's Way: Pigboats in Print!

Pigboats is now available in print! This project is now set! If interest warrants, I'll be producing variants for German Uboats, British, and/or Japanese subs.

-clash
Posted by clash bowley at 12:15 AM No comments:

When in a suitable area, once per day, a character can search for alchemical ingredients using a Natural Philosophy check. On a failure, no ingredients are found. For each success, a point may be spent to find ingredients.

For one point, an ingredient may be selected from the standard list.

For two points, a rare ingredient will be found from a custom list pre-created for the campaign, or the player may design an ingredient, which must be added to the custom list.

For three points, an extremely rare ingredient may be found, designed by the player, which will not be found anywhere else - though it may be found in the same place again - and should not be added to the custom list.
Posted by clash bowley at 1:56 AM No comments: 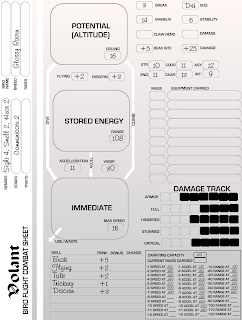 And here is the other bird our playtest group will be riding, the Glossy Raven!

-clash
Posted by clash bowley at 5:08 PM No comments:

Here's the Bird Combat Sheet for the Olive Crane, a giant bird breed we created for our Volant playtest. 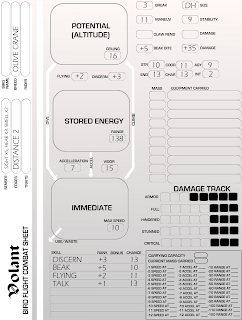 Volant - Religion and the Character

First, all characters gain the things anyone gains from religion in our world - comfort in adversity, confidence in the self, certainty of purpose, moral guidelines, and the like.

Second, Believers and Strong Believers can be the beneficiary of miracles.

When working in accord with the dictates of her religion, and against something antithetical to that religion, a Believer gains an Edge. In the same circumstances, a Strong Believer gains two Edges. Players may declare their characters’ religions strengths when they decide on a religion.

Practitioners are those who follow a religion, but do not hold to it in daily life. When pushed, a Practitioner tends to think of himself rather than his religion, and do whatever is of most benefit at the time. Attendance at worship is spotty, rituals are skimped, and belief is shallow. Many followers of religion are Practitioners.

Believers are those who hold to a religion in more than name only. They practice rituals even when inconvenient, try to hold themseves to the precepts of their religion in their daily life, and would only deny their religion for subterfuge. There are always vastly more Believers than Strong Believers in any religion.

Miracles are always entirely subjective - they always take the form of something which can be attributed to luck, chance, psychological manipulation, or willpower. A disease can spontaneously remit. A character can survive poisoning. A million to one shot can be made. An earthquake can open the walls of a cell. The impact should be major!

Once per campaign, any Believer can ask for a miracle. Unless there are insurmountable reasons to say no, or the miracle would violate the precepts of the religion, the GM should grant this. If denied by the GM, the character may ask again in other circumstances. A Strong Believer may ask for an additional miracle, that is two miracles per campaign, under the same conditions.
Posted by clash bowley at 2:37 AM 2 comments:

Pigboats Reviewed, and Roll for News!

Joe Wolz has already put up the first review of Pigboats! Here's the review:

Also, Ryan Shelton interviews me talking about Pigboats in Roll for News - which is a very cool podcast. Ryan interviews people with new games coming out in a short - 5 minutes or so -  format. No rambling excursions. it's all cut to the chase!

-clash
Posted by clash bowley at 12:31 PM No comments: