I am working on a support thing for StarCluster 4 - Out of the Ruins. I had a problem with Ruins - basically, because of the lack of an outer gas giant in either of the two systems, it is impossible to fly directly between the two with the typical short range space ship, which typically needs to use outer system gas giants for slingshotting to speed up or slow down into or out of systems, so travel between systems was only by long range ships.

So last night, I dreamed about Helcaraxe.

Helcaraxe is from Tolkien's Silmarillion, which is the holy book of the Ruins setting. It means the Grinding Ice, and it was the means for those Noldor who couldn't leave Valinor to return to Middle Earth.

In my dream, Helcaraxe was a rogue gas giant - that is without a sun. It was hot, but that was not enough to heat its moons which were all covered in ice. It had eight moons, and four of them had space stations orbiting them. the stations were mining ice and breaking it into hydrogen and oxygen, and mining minerals for their stations.

And that was the solution to my problem. Going into and out of Helcaraxe would be easy - no big ass solar gravity well to fight! - and with the stations to refuel them, they could, by stopping at Helkaraxe, reach the other system with enough reaction mass to brake in.

Posted by clash bowley at 3:52 PM No comments:

I asked on Google Plus what the next StarCluster 4 game should be, and only one person answered - and there you see the immense amount of fascination my games engender - so Brian Isikoff, you are getting a game designed just for you! Announcing *StarCluster 4 - Sabre & World*, a Sword and Planet game for StarCluster 4. Here is the character sheet - I almost always start with a character sheet - in which you can see what I aim to do with this game: 1. The typical damage boxes are gone, and the State boxes are greatly increased. Each state is tied to an attribute or a resource. States tied to boxes when checked indicate the attribute is at -2 from normal, so if your AGY were 10 and you were Hobbled, your AGY would be down to 8. States tied to resources - i.e. PSI or LUCK - when checked indicate the resource is unusable.

2. There is no weapon damage, just range. All fighting results in a hit or a miss. If you take a hit, you must check a State box. So, if you take three hits, you will have three State boxes checked - for example you are now Shaken, Exhausted, and Confused.

3. There is now a big section on Relationships. There are three white background relationships - Love of Life, Trusted Confidant, and Boon Companion. You write in the names of one person in each of them, if that relationship exists. You can only ever have one of each - you can have a million friends, but only one Love of Life. If the person named is in danger, you can, once a session, check that box and uncheck two State boxes.

There are two relationships on gray backgrounds - Respected Elder and Protected One. The names of these change from session to session - these are roles of responsibility. If the person named is in danger, you can, once a session, check that box and uncheck one State box.

There is one relationship on a black background - Hated Enemy. There is only at most one Hated Enemy at a time, and once that relation is named, then only the death of the Hated Enemy can change it, and even then only in the next session at the soonest. If the person named is facing you, physically present, you can, once a session, check that box and roll two extra dice.

Not also that "Company" is changed to "Politics" in the upper right background stuff. This is an indication that politics and factions will be very important in this game. The game world will be city-states, the rulers of which can be - but are not necessarily linked to one of eight factions, which each represent a philosophy, like a combination league and political party. Each character will possibly also eventually choose a faction they favor. If so, this is where you put it.

And here is the character sheet. :D 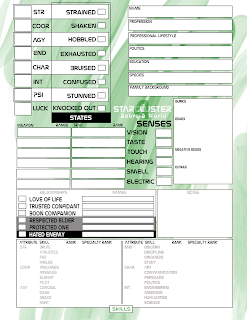 Something that has been available for a while in pdf, but I have just released it in print - Fragments of Air and Stone, the supplement for Volant that shows you how your Association can build up and improve a fragment - those smaller chunks of floatstone that break off a skyland. 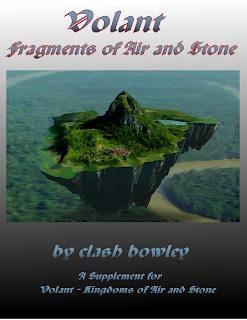 Posted by clash bowley at 2:16 PM No comments:

Merry Epimas all! This year StarCluster 4 - Out of the Ruins is in the Cheer bundle! Have fun!

Posted by clash bowley at 4:00 PM No comments:

Posted by clash bowley at 10:35 AM No comments:

in print from Lulu - http://www.lulu.com/shop/clash-bowley-and-albert-bailey-and-klaxon-bowley/starcluster-4-toolbox-5-characters/paperback/product-22980480.html

in pdf from Precis Intermedia - http://www.pigames.net/store/product_info.php?products_id=855

in pdf from One Book Shelf - http://www.rpgnow.com/product/200184/Starcluster-4--Toolbox-5-Characters

Posted by clash bowley at 2:47 PM No comments:

StarCluster 4 - Out of the Ruins Released

Released a new game today! StarCluster 4 - Out of the Ruins. Out of the Ruins is a new game set in a new universe. The Humans are gone, and the New Humans and a bunch of other successor species are trying to expand. It features a tech much like today's, but with FTL-accelerated Atomic Rockets. Oh! And their Holy Book is The Silmarillion.

For print at Lulu - http://www.lulu.com/shop/clash-bowley-and-klaxon-bowley/starcluster-4-out-of-the-ruins/paperback/product-22980442.html

Posted by clash bowley at 2:42 PM No comments:

StarCluster 4 - Out of the Ruins IRC Game

So, next weekend I start a second StarCluster 4 - Out Of The Ruins game, this one on Sundays over IRC. After the new year I will be switching between that and our extremely long running Classic Setting IRC game every other Sunday. I have been running this game since 2003, through StarCluster 1E, 2E, 3E, and now 4th Edition.

In the Out of the Ruins game, we will be doing an exploration game of a new solar system. The Association has bought up an old license to explore the Valinor system and now the PCs are going to interpret it widely and creatively to use it to explore the new Numenor system on the cheap, while the official Church sponsored expedition is hitting cost overruns and production delays.. :D

In the Classic game, we are playing the four grown up heirs to our old Beginner's Luck crew, three years after the crew disappears - they "mis-jumped" into Jeshen Space, and have no idea how to get back! The four girls were rescued from a life as age-retarded sex workers - they were given a drug at a very early age that slowed their aging, and looked 12 when they were over 18 - and adopted by the crew. The were in their second year at college when the Luck disappeared. Now they have graduated, and are about to unleash themselves on the world.

Posted by clash bowley at 12:29 AM No comments: