I think I am going to drop this blog. I have no idea why I am writing it. I haven't got a comment in months, and it seems any interest in what I write about is no longer there.

I started work last week on a starter scenario for In Harm's Way: Pigboats, to be either included in the game, or downloadable - I haven't yet determined which. This is the most-asked-for addition from the beta-testers. The reason is that Pigboats adventures/issions are structured differently, and this adventure will serve as a template for groups preparing their own missions.

It will be called Turmoil in Truk, and will be based on and around the Truk Islands in the Carolines. Truk was Japan's major base in the Central Pacific, and the line Japan-Saipan-Truk-Rabaul was the main materiel distribution and staging line in the Pacific. Truk is a group of heavily inhabited and developed islands, surrounded by an enormous atoll with five major passages through.

As a Situationalist GM, I have a lot of trouble with writing scenarios. Railroads are just *out*, and prepping a sandbox is boring and tedious. The Situationalist way to prep is to give NPCs as vectors, and assign them goals, personalities, and resources. Thing is, most of the readers will have no idea what to do with these vectors. I have to slot them in with an explanation on how to use them.

For example, a supply convoy is coming into Truk. I would need to establish the composition and starting point of the convoy and its escorts, the *resources*; describe the convoy leader and his second in command - in case the leader is killed, the *personality*; and give their orders, the *goals*.  I would need to do this for the Japanese Naval Task Units temporarily  in Truk, the Naval Garrison, and the Army Garrison. Maps will show geographically the gates and funnels things must flow through in the islands.

I also need to do this for the base in Pearl Harbor, for the period before the mission, defining the Base admiral, Squadron Commander, and a few other sub commanders, both friends and rivals. Then I need to formulate the orders for the submarine itself, allowing the commander to implement them as he wills. there will also be some ULTRA messages which can be thrown in as needed.

A lot of work to do - far more than I normally prep, as all I need to GM are resources and cryptic notes. Arrgh! And probably it will all be ignored to run a linear plot or used to build a true sandbox! :D

-clash
Posted by clash bowley at 11:34 AM No comments:

Based on feedback from a whole lot of people on G+ and roludo.ca, this will be the final cover for Volant, based on an idea from Klaxon: 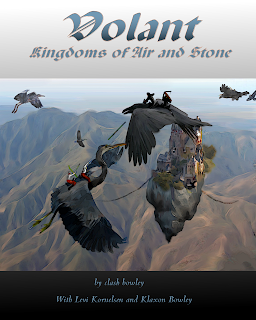 -clash
Posted by clash bowley at 7:33 PM No comments:

Posted by clash bowley at 8:51 PM No comments:

From the introduction to Volant - Kingdoms of Air and Stone:

Dalgar sighed. “No, little one, you cannot be a wizard. There are no wizards any more.”

Harein pulled her braids and looked cross. “It’s not fair! Why aren’t there any wizards any more, Papa? What happened?”

He sipped his beer and looked out the window at the massive cliff where Jaimar butted up against Loriman. Stout cables and great chains laced the cliff side, pulling the two lands together. “It happened long ago, Hari. Long before I was born, or even Gemma. They used up all their magic, and there was none left over.”

Harein thought about this, pink tongue sticking out and brow furrowed in concentration. Then she frowned. “They should have left some for us. That was mean!”

The girl shivered. “Good thing we were above them, huh, Papa?”

“We weren’t, baby. All the people were down on the earth back then.” Dalgar shook his head. “There was no where to go.”

Harain’s eyes opened wide. “What happened, Papa? How did we get away?”

“The Wizards of stone cast the mightiest spell ever made. It was so powerful they pulled all the magic from every person on the earth, and put it into the roots of all the mountains, and the mountains tore away from the earth and flew up into the air, and the people were saved.” Here he looked into her wide eyes. “But all the wizards, every one of them - even the baby Wizards, honey - every one was burned to a crisp and died. Since then all the magic of the world is locked in the stone and in the plants and animals, and not a bit is in any human.” Dalgar waited a moment as his daughter wiped her eyes for the burned babies. “Why did you want to be a wizard anyway, baby girl?”

Her fierce glare returned. “That creepy Joslo Horm is being a pest, and I wanted to turn him into a toad!”