A new edition of the old favorite from 2006, using the StarCluster 4 game engine. Here is the new cover, which I think is really striking. 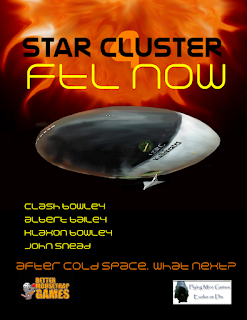 Posted by clash bowley at 2:20 PM No comments:

The first five StarCluster 4 game books in print, including a pre-release proof copy of Dark Orbital! All mine! All are under $20, with Zero Stage under $10 and Free under $5.﻿ All released since the end of June. 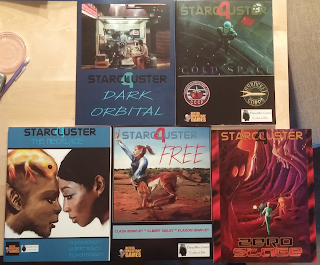 Posted by clash bowley at 11:29 AM No comments:

One of the characters I created yesterday for Dark Orbital:

Drusilla is currently an exterminator, which gives her a Poor Lifestyle, though she has been a courier and an actress on the Yakker net in the past. She kills rats and sells the meat. Her feet have been cut off and replaced by integrated in-line skates, making her very fast, though walking and climbing are awkward. She has a lot of other cheap ass modifications - a built-in Yakker Comm, An Adrenaline Surge pump, A Blood Oxygenator so she doesn't need to breathe for 15 minutes at a time.

She also has a permanent Augmented Reality game in her brain, her skin can change color arbitrarily, and implanted chromatophores and squid neurons to control an animated snake tattoo that slithers over her body. She also has had her hair replaced by snakes recently, but that changes over time. She has also had chinchilla fur and a feathered crest at other times. Dru is a slave to fashion, though she does her best to create it.

She is fully genetically human, and is 27 years old.

Note I didn't give you her attributes and skills - why would you care about those? :D

Posted by clash bowley at 10:06 AM No comments:

I am basically done with StarCluster 4 - Dark Orbital. I will start playtesting it this weekend. You can play this game two ways, I think. Most people will probably play this all grimdark. I - on the other hand - will be running this as black comedy. I personally really dislike grimdark, but it's apparently very popular, while comedy of any kind is really unpopular for RPGs. So, my advice: If you find yourself somehow tricked into running this thing, because I'm sure that's the only way anyone is going to run it, remember to put away your sense of humor first!
Posted by clash bowley at 8:26 PM No comments:

I have removed StarCluster 3 and StarCluster 3 Light from availability. I have replaced SC3 Light with StarCluster 4 Free. Now I have to decide what to do with the old game - well, not that old! I released it in 2011! I made SC2 available for free when I released SC3, but that was stopped when someone reviewed SC2 and gave it one star on RPGNow. I don't need that when I am averaging 4.5 stars on my reviews. Should I release it for free? Release the Developer's Edition for free with the license? Give out a new developer's license with SC 4 Free? Please comment and let me know what you guys think! 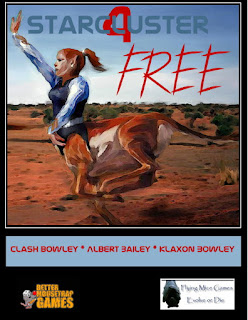 Posted by clash bowley at 4:14 PM No comments:

Gendy brought the bloody boy in to the Tors Clinic. “I found him.” she said. “I found him in my alley. Like this.” she gestured, “Well, whaddya want,” growled the clinician. “A fucking prize?” “No, duh! You gotta fix him up!” The clinician looked down at the boy. “I dunno, he looks like a lotta work.” He pushed the boy with his toe. “Covered in blood he is.” “Yeah, well...” Gendy hesitated. “He had this on him...” She handed the clinician a bag with a few tokens in it. The clinician looked in the bag and looked at Gendy, frowning. “And I was saving this, for a special occasion, y’know? But you can have it.” She handed him a bottle of scotch. “It’s the real deal. Still sealed.” The clinician cracked the seal, sniffed, and sipped. “Alright, deal.” Gendy looked sadly at the bottle. “He’s gonna owe me big!”

Getting Prosthetics at a Chop Shop:

“Uh oh! Shit!...” said the doc, Jasmine “Rocky” Raccoon. “Uh oh what?” cried Mungo, the patient. “This new IR eye is too big!” said Rocky. “I had to order it from my cousin Joey... I mean the Tinker! A month ago so it would be ready today!” “Gaddamn it! You already took my eye out!” complained Mungo. “We’ll just have to make it fit!” reassured Rocky, revving up the grinder. “You gonna grind down the eye case?” querried Mungo. “Hell no! That’s too delicate! I’ll grind out your eye socket!"

Ulmet Striper waddled down the alley. There it was, L18-U46-5224J. He measured - a definite wobble! Pretty good shape otherwise! Not that anyone would detect it - his instruments were much more discriminating than human senses, and technically all grav plates wobbled a little - but he could confidently say it was faulty, and bypass the lie detectors. He whistled as he assigned the plate to scrap. He set up work barriers, and pulled the plate up from the street grid and replaced it, logging the number into the grid. All fixed! He headed back to Maintenance HQ. Of course. in Hellmouth Alley, he met his buddy Frank, and set the plate aside while he chatted. He very carefully did not see the plates switched. He said goodby to Frank, and headed to Scrap to hand in this sadly worn and dinged up plate, which was, as far as he knew, L18-U46-5224J. He whistled happily. It was good to be a conscientious worker!

Posted by clash bowley at 4:41 PM No comments: