This is the Albireo, the ship designed for my "Star Wars-ish" StarCluster 3 game by Klaxon. Following are more finished, inked in, plan and view drawings for the ship. 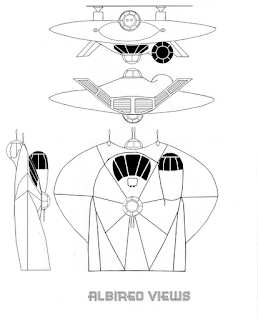 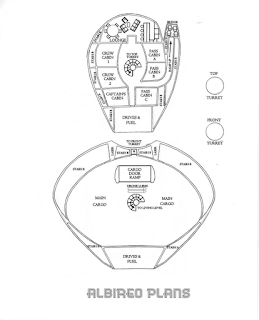 Posted by clash bowley at 1:04 PM No comments:

Here's some pencil sketches I did for the Albireo, the smuggler ship. Note the large number of odd shaped niches for smuggling cargo. :

The Views of the Albireo

The deck plans of the Albireo

-clash
Posted by clash bowley at 11:44 PM No comments:

Here are a couple of the 12 alien species I made for the StarWars/StarCluster campaign, to be available as PCs. Six were adaptations from StarWars, and six were new creations, in StarCluster format. These are species sheets, not character sheets:

Posted by clash bowley at 10:58 PM No comments:

Active plasteel consists of tiny prismatic elements ("bricks") consisting primarily of plasteel but incorporating other microscopic components that allow the ensemble of prisms to reform for form structures of arbitrary shape.  The length, width, depth of the varies from 0.1 to 0.3 mm in size and each brick is capable of joining electromagnetically with the surrounding bricks to form structures with 80-90% of the strength of regular plasteel.  Each brick has is own tiny EM bottle power supply, magnetic attachment and movement points, optical inter-brick communications, and the ability to emit and reflect light of arbitrary color in discrete directions.  These optical abilities allow any pattern to be created, each brick acting as a separate pixel.  These microelements absorb a small amount of light, making active plasteel slightly absorptive, a 1 cm thickness absorbing about half the light impinging upon it, assuming no active retransmission or absorption.  While active plasteel can form arbitrary shapes, it retains the basic stiffness and hardness of ordinary plasteel.  When active plasteel is severely damaged, it can become "confused" and reform incorrectly.  For this reason, it is not generally used as body armor, since incorrectly reforming active plasteel armor can injure or kill the wearer.

Active fabric consists of tiny active microfibers of approximately 10 microns across and 10 mm or more in length.  Garments make of active fabric have multiple layers where the fibers within a layer are aligned in a single direction but attach to fibers in other layers aligned in other direction, i.e., they are not usually interwoven like most natural fabrics.  The optical characteristics of each microfiber can be arbitrarily adjusted, allowing a garment to appear with any desired color. The fibers can attach seamless to form an airtight surface, or can attach with spacing giving a garment that can "breathe", with spacings from quite tight to arbitrarily gauzy.  While having a tensile strength close to that of plasteel, active fabrics have low flexural strength and cannot form structures of high rigidity.  Tactile properties can be adjusted to simulate most natural and synthetic fabrics  Thermal conduction units in the fibers allow garments made with active fabrics to heat or cool, though this requires their attachment to a thermal source-sink unit at some location.

Active foam is a material whose density and rigidity can be controlled by electromagnetic stimulation by control fibers that permeate the foam.  The material can take on a density of 0.01 to 2.0 and can change from a fluid to a soft foam to a material as rigid as dense wood.  Its form is not directly controllable; it is ordinarily used contained within structures of active plasteel and/or active fabric which determine its form.  It is most commonly used for reconfigurable furniture, padding, etc.

Active flesh is a catch-all term for the various artificial tissues used for producing reconfigurable androids.  Active flesh elements are 1-10 mm each dimension but are able to smoothly configure their shapes and density by up to a factor of three.  Active flesh elements  are normally permanently attached to surrounding elements, the changes in shape being created by the reshaping of each element, rather than repositioning of the elements.  While active flesh units are capable of significant changes in shape, texture, and color, several different types of active flesh are generally used: synth-bone is used to form a reshapable skeleton and teeth, synth-skin for the outer covering, and synth-flesh for the major internal tissues.   Some organs (notably eyes) require specific construction and cannot be workably constructed from generic active flesh tissues.  Synth-skin is usually constructed with artificial hair follicles able to emit or retract synthetic hair or fur.  (If the hair or fur is repeatedly cut, the synth-skin may require replacement.)  Active flesh cannot be made as strong as active plasteel, but can achieve strengths many times that of natural tissues.

Posted by clash bowley at 9:19 PM No comments:

A Star Wars Prequel in StarCluster

Tonight was an awesome session! Instead of Volant, since one player was out, we decided to start our Star Wars game as a prequel session. The game is set between the defeat at Hoth, and the Alliance victory at Endor. They each made two characters, one a Jedi or Padawan, the other a member of a smuggler's crew. The two halves of the group were forced together because the Jedis are fleeing Imperial eradication, and one of the Jedi was able to play a mind trick on the smuggler captain, and they are now off planet.

It ran smooth as silk, the players dropped into character like they were old friends, and things just felt like StarWars, not StarCluster.  We'll be playing this again next week as a different player will be out, then back to Volant. We sill pick this game up as soon as the Volant playtest is concluded. :D

-clash
Posted by clash bowley at 1:25 AM No comments:

After StarCluster 3 was released in 2010, I made a couple posts on my blog on how one could run Star Wars with SC 3, despite SC 3 being a moderately hard SF game.

Well, Ive committed to run a Star Wars game using the StarCluster 3 ruleset, putting my money where my mouth is. Here's what I came up with as necessary rule changes:

The maximum power you can put into a Force skill is your Force rating. Each Power use will use up one point of the Related Attribute to open the channel. Roll skill chance. If successful, the Force skill can be used. One Attribute Point will return after1 hour of non-use, with one point regenerated per hour thereafter.

Any character with Force may, by using a LUCK point, have a Hunch. A Hunch is a strong feeling about someone else. The player asks a specific question of the GM, telling the GM he is using a LUCK point:
Player “How does she feel about me? I’m using a LUCK here.”
GM: “You have a Hunch she is attracted to you, and is using the verbal jousting and insults as a form of flirting.”

The Hunch is always correct - the player has paid for it after all! - so do not use the Hunch to mislead a character. Hunches work by telling the character what another character is feeling or thinking. They do not give a character a correct solution to a problem, or give information about a thing or a place.

If a character uses a Hunch on another PC, the other player has to answer the question honestly and as completely as the GM would if the GM were answering, so long as the question was properly asked, just as if it were an NPC asked about.

Force skills can be used in a low-power, no-cost way. Using a Force skill in this manner does not cost the character any Attribute points. Close observation requires the character to look directly at the target from no more than 3 meters away

The Light Side and the Dark Side of the Force

The Force has two sides, a light side and a dark side. Performing actions which are hurtful, perverted, and destructive increase your dark side potential. Performing actions which are helpful, healing, and constructive increase your light side potential. Each step is far greater than the one before, and in order to focus more than one step far more is required of the character for the next step.

A character’s potential force is increased by focusing on the dark or light side. Characters are born with the force potential which maximizes at five. By focusing on one side or the other, one increases one’s power for that side by decreasing it on the other.

Spaceships in Star Wars operate differently than in star cluster.

Anything labeled G is a measure of speed not thrust. The 3G engine is just faster than the 2G engine.

Jump lines are labeled in light years of distance.

The Jump Drives must rest for 6 hours before initiating another jump line run.

There are no missiles.

All pods are counted as turrets.

Transfer is no longer a Psi/Force skill. Jump routes of ratings 1 and 2 can be performed by droids.﻿

Jumps can happen from any place in a system clear of major gravity or debris.

All Gun skill is the same as Beam skill.

Storm trooper armor has a coordination limit of six and 30 damage reduction.

Bounty Hunter armor has a coordination limit of 10 and 15 damage reduction.

All armors are ceramic

Implants are restricted and crude.

Communications Tech works as in the Star Wars movies.

Systems are under control of a single Species.

No Biotech beyond Bacta tanks.

One of the possible results for the SC3 world generation tables is a result of "really physically bizarre". This was the result rolled by Klaxon, my son, when creating one of the playtest settings for SC3. He thought about it, and came up with "the River".

The River is the world partially natural and partially constructed. The natural part is a gas Torus in orbit around a neutron star which is itself in orbit around a normal star in its Goldilocks zone. The gas torus is about 1,000,000 km thick, and circles the neutron star outside its Roche limit a very fast orbital speed. This gas is apparently the result of a gas giant being pulled apart by tidal forces and gravity. The constructed part was found in situ when the world and the system or colonized. This consists of a variety of asteroids – apparently an entire asteroid belt – being pushed within the glass torus, and the eponymous river.

The river is a kilometers wide ribbon of water which meanders throughout the dense central ring of the torus. It is constructed – apparently by the Seeders – with gravity nodes which propel the water of the river along all the way around the torus. It waters many of the asteroids in its path, and can be sailed by watercraft throughout its length.

The central part of the gas torus is much thicker, and is at a breathable pressure. There is life throughout the torus, which gives it an oxygen atmosphere. There are settlements on the asteroids as well as constructed in open air. The asteroids have microgravity, and the river has a heftier artificial gravity, but the rest of the world is gravity free, with only constructed gravity available. The thickness of the atmosphere shields the river from much solar radiation.

This setting can be used in any science fiction game which has FTL travel and gravity manipulation.

–clash
Posted by clash bowley at 9:40 AM No comments: