In my Kitbash of *StarCluster 4 - Sabre and World* and *Volant*, the player characters have been transported into the world of Volant's flying hips and giant bird riders. Here are some of the bird riding warriors they ate going to meet! BTW, almost all bird riders are women for reasons of mass. Duhali culturally dresses skimpier than the other two, men and women. Chasseurs are scouts and scavengers, Hussars are single rider warriors, while Dragoons ride in twos on the biggest birds. 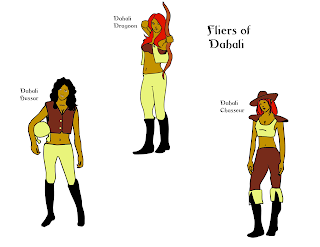 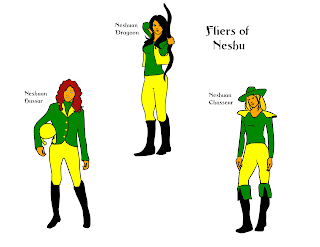 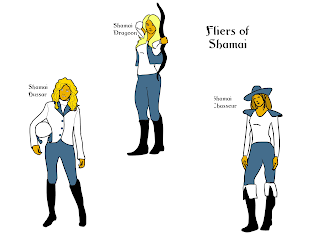 Posted by clash bowley at 7:08 PM No comments:

Will start up this game on Thursday Night over Discord! I'm getting excited!

The plane will be a Gweduck 6 place amphibian. The characters are travelling from California to the Alaskan Panhandle - Tongass State Forest - to camp for a week. There is an aeronautical engineer, a pilot, a veterinarian, and a safari guide. They all went to UCLA together as undergrads.

They will have the following stuff in the cargo compartment of the plane:

Posted by clash bowley at 6:06 PM No comments:

In setting up my latest game - a kitbash of StarCluster 4 - Sabre & World (chargen & mechanics) and Volant (Setting) I hit an interesting point. S&W is slanted towards the John Carter type - ex-military, physically fit, survival oriented - and the chargen reflects that. It is very definitely optimized for your typical Sword and Planet heroes/heroines. Volant is a post-magical-apocalypse setting, with civilization rebuilding itself in a new way with new ground rules. It is not a safe, urbanizad setting. The first session of the game will start with the following setup, known to the players:

The PCs are ex-UCLA buddies who have kept their relationship tight. They are now in their mid-late twenties, settling into careers. They are all enthusiastic flyers, and one is an aerospace engineer, who has built up an amphibian kit plane - a Gweduck actually - and are flying up to the Alaskan Panhandle for a camping vacation together in the wilds. They will fly into a cloud and when they come out they will be in the Volant setting. They know this - it's no bait and switch.

They have two characters finished. One is the engineer - who has a lot of science background; physics, chemistry, etc. - and the other is a veterinarian. She is very good with animals, communicating and controlling as well as treating.

Neither one has a high weapon skill. This is perfectly understandable given their backgrounds, and will be fascinating to play, but they will have to deal with monsters and men unskilled, or use some non-violent means. Both are happy with their characters. I'm not even sure how they could generate these characters from the templates in S&W, but they did! This will be very interesting.

One thing that seems to have helped is the Hobbies option from SC4 Toolbox 5, where you can swap out skills from your hobbies for skills from your job. I know the Engineer used this with a Science hobby to change his skills to a more science focus, and the third character's player has also mentioned that this was helpful, though I have not seen that character yet. One could also use this to gain more outdoorsy skills with a camping hobby, for example.

Anyway, I am interested ti see how this will all work out.

Posted by clash bowley at 5:46 PM No comments:

Klax, El and I played a rousing playtest game of setup for the StarCluster 4 - In The Beginning RPG. Or any solar system only rpg, actually! :D It worked out quite well, with some very minor modifications needed. The game worked perfectly as a setup for the RPG! By 2120, the Great Powers were USA, UK, Malaysia, S. Korea, and the Philippines, and the Lesser Powers were The EU, Iran, Ethiopia, New Zealand, and Chile. There was an independent colony on moon in the Mare Nubium. There were self-sufficient colonies on Mercury Orbital 1 (NZ), Mars Orbital 1 (SK), and Ceres (Malaysia). There were mostly stable colonies on Earth Orbital 1 (Philippines), Earth Orbital 2 (Malaysia), Vastitis Borealis on Mars (USA), Ganymede (NZ), Io, (Iran), Oberon (UK), and Venus (SK). Mostly Unstable colonies were on North Pole Mars (Philippines), and Titan (Chile). There were new Unstable colonies on Neptune Orbital 1 (NZ), and Eris (Ethiopia). Quite an interesting layout! I'd be happy to play in that setup! :D As a board game, it is currently lacking competitive rewards, which we are instituting with open goals and competitive secret goals. Hopefully that will play well! The game took 2 and a half hours to go 100 years into the future, and that included copious note-taking for details that a board game would not need.
Posted by clash bowley at 6:53 PM No comments: