StarCluster 4 - In The Beginning and The Great Game

Working on implementing the changes suggested by the Beta testers for StarCluster 4 - In The Beginning and The Great Game! So far the great majority of suggestions have to do with changes to components and/or procedures. For example, the game board in The Great Game is gone, replaced by separate tiles, connected in when the proper time comes. The Colony Status Markers and Power Status Markers are also very different from before, so that they are visually distinctive even while printing in gray scale as well as being simpler to read. A big thank you goes to our playtesters! We are awaiting final word from our last playtester, who was a bit delayed, and once we have implemented the changes recommended, we will be releasing both games! They will be available both separately and together.
Posted by clash bowley at 8:25 AM 1 comment:

I am going to use the simple damage mechanic I used in StarCluster 4 - Sabre & World, a Sword & Planet/Planetary Romance game I released a couple years ago. Unlike standard StarCluster 4 damage, you don't add a damage modifier which varies by weapon to the successes you roll. Also in standard SC 4 there are a varying number of from 1 to 8 damage boxes on each Attribute - the higher the attribute, the more boxes are open - with a final Condition box which affects that Attribute when all boxes are full, and which will not heal normally over time, but needs medical treatment. Here is a SC4 standard character sheet: 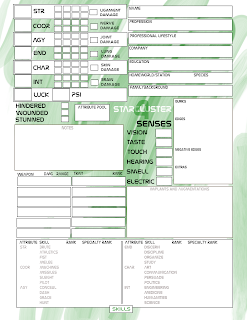 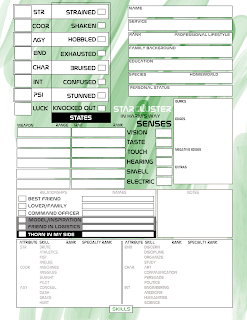 Why did I do this this way? Because military weapons are MORE damaging! A hit from a Ma Deuce will sever - or rather explode - a limb, a head, or blow your viscera out, and the Ma Deuce is 100 years old. And I doubled down for realism. Heavy Weapons like the Ma Deuce inflict TWO boxes of damage per success, which means four successes on a single round form a M2 will inflict 8 boxes of damage on an unprotected body, filling every damage box in one hit. The future military we are addressing will have to absorb - soak - that damage elsewhere. The body can't take it. The result is the vastly upgraded military armor system. Here is a sample Military Armor from IHW - SC4: 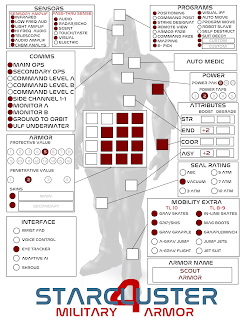 Note that this is fairly light armor for a scout, geared especially for sensory input and communication. Firstly, any weapon has to penetrate the armor in order to do any damage. It then has five boxes available that can be absorbed without compromising the armor in any way. Note there are a maximum of 16 of these hit soaks for any armor. After those five boxes, the character can assign damage to internal systems as they choose, as well as their own body boxes. There are 9 boxes available after the first five on this armor, one to a system. Programs, Sensors, Comms, Power, Power Assisted Endurance, Power Assisted Agility, Seals, Mobility Extras, and the Autodoc. Each hit on these nine boxes degrades the suit, destroying one feature with each hit. The suits auto doc has automatic tourniquets on limbs, automatic drug injections, and other abilities to increase survivability. If the suit has an AI, it could decide to knock out the character and bring the character back alive to increase survival rates. At any rate the autodoc monitors the character's vitals and deploys automatically if needed! Here is a heavy armor for shock troops: 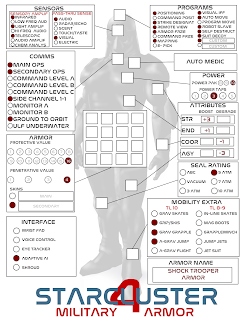 Note the very different emphasis. Each armor suit is designed to a particular set of needs to the limit of available technology. Also armor can link to various robots to multiply firepower or mobility or carrying capacity as needed.

Military armor is keyed to an individual, and can only work for that individual unless reset. Communication is of course heavily coded! Note power taps for energy based weapons so you need not carry power sources other than the suit's power pak.