Relationships in the Wavefront Empire

When you are already working with a totally different social setup, double down, I say! Double down! I will be very lucky to sell just one of these when I am done with it! 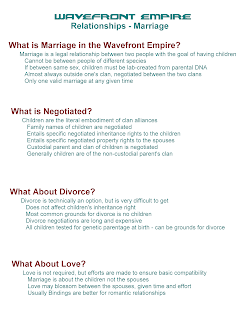 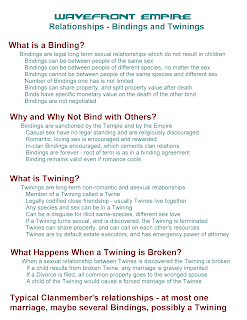 Posted by clash bowley at 3:17 PM No comments:

Here is the Tree for the Musician's Guild for Wavefront Empire. Trying to decide how to present differences in musical style in a setting so extremely far in the future was daunting. I finally decided on call them Classical - for very old but perennial music, Trad - for the last generation of music, and Pop - for the current generation, whatever they might be. 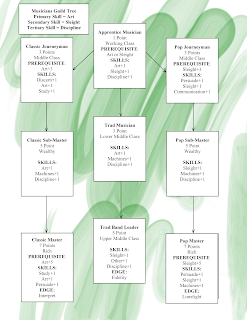 Posted by clash bowley at 8:52 PM No comments:

Before 2000 years BBY humans expand into the galaxy using sleeper and generation ships. Many are genetically tampered with, eventually forming most of the humanoid species - Twilek, Togruta, Wookiee, Chiss, Zabrak, etc. On various worlds non-human alien species evolve. Along the way, humans meet various aliens, and also are infected by Midiclorians, which sensitizes humanity to the Force.

c. 2000 BBY precursors to the Jedi order form on various worlds, as people attempt to deal with the Force. They discover hyperspace in their experiments, and a few ships were created using these pre-Jedi as living hyperspace drives.

c. 1800 BBY Duros create artificial hyperspace drives and begin expanding into neighboring systems. Tey eventually run into Humans who somehow acquire the technology - buy or steal - and in a cascade, the hyperdrive is spread across the galaxy. At this point, hyperdrives would be rated at 20 or so on the current scale.

c. 1600 BBY the Jedi Order takes form on Jiddha, Atch-To, Tython, and other worlds. At this time most Jeddi are Gray, and Light or Dark Jedi were treated as unbalanced.

c. 1500 BBY the Old Republic is formed. It is one of several moderate sized empires founded about this time.

c. 1400 BBY the Sith Order splits from the Jedi. The Jedi order purges itself of any use of the Dark side, and begins a reformation process.

c. 1350-1050 BBY the Old Republic, which soon allies itself with the Jedi order, engages in a series of devastating galactic wars with the mandelorians, the Sith Empire, and other star empires. By this time, Hyperspace drives would be rated about 10 on the current scale.

c. 1050-1032 BBY the Old Republic is almost defeated when the allied Sith and Mandalorians Empires take Coruscant, but the occupation is short-lived, and in 1032 BBY, the Old Republic is transformed into the Galactic Republic after finally defeating the Sith and Mandelorians. The Sith Empire is utterly destroyed. Darth Bane, last Surviving Sith Lord, institutes the Rule of Two.

112 BBY Invasion of Naboo. The fastest hyperdrives are rated 1

104 BBY The Clone Wars begin with the founding of the Confederacy of Independent Systems.

99 BBY Empire Founded. Jedi driven into hiding or killed. Massacre of the younglings.

19 BBY Ezra Bridger, Luke Skywalker, and Leia Organa born. Luke and Leia stolen from their mother, Darth Vader's concubine, by Obi-wan Kenobi. Vader finds Obi-Wan on Mustafar. In a duel, Obi-Wan defeats Vader and leaves him helpless, but he lives, sealed in his armor from this point on.

5 BBY Kanan Jarrus takes on Ezra Bridger as a Padawan.

~4 BBY the Alliance begins to form from separate Rebel groups

Posted by clash bowley at 8:55 PM No comments: