What's up next, clash?

I'm starting work on a new version of Volant using StarCluster 4 rules. Volant - and Lowell Was Right! - were the last of the StarCluster 3 game written, and were where I came up with Template Trees, So I can get some ideas from the trees in the old version for the new one, but they will have to be re-written for the new game as the skills are handled completely differently. I will be using the lighter version - and StarCluster 4 is light already - of the rules found in Sabre & World which will suit the pulpiness of Volant very well. Next will be a StarCluster 4 version of Lowell Was Right!, which will also use the Sabre & World rules version.

The BloodGames 4 - Outremer Setting is out today, and The BloodGames 2/Outremer/OHMAS series of games in now officially replaced and retired. Yay!

We are almost finished with the Outremer setting. I am working on the last few Paths of Power. When I release it, I will remove Blood Games II, OHMAS, and Outremer from sale everywhere. We plan topublish other settings and toolboxes for Blood Games 4 in the future.

Posted by clash bowley at 10:56 AM No comments:

New album review of my one and only concept album, Dark Orbital, is up. This is set in my StarCluster 4 - Dark Orbital setting. Enjoy!

Posted by clash bowley at 1:46 PM No comments:

I have been working hard on this supplement which will open up Blood Games 4 like a cactus flower in moonlight! It covers game worlds set in the time between the early Renaissance and late Victorian eras. New Association options, new PC Species sheets, new Paths and Quasi-Paths, new Template Paths, New Bestiary, and a new way of creating Chimeras!

I have been running a game to test it out and we are having a blast! Police detectives in a magic-friendly Victorian London - dealing with Hags and Dragonets, Basilisks and Hippogriffs, and all the strange varieties of magical mayhem.

A Hint of Blue Released

My eleventh album, A Hint of Blue, was released this morning on bandcamp. Here is the link:

Two of the songs have roleplaying links:

Planetfall is based on an In Harm's Way - StarCluster game I ran featuring a whacko bunch of drop troopers nicknamed the Odd Squad.

The title song, A Hint of Blue, was composed and performed in character by an NPC in my Jeshen Space game.

Chimeras are a combination of two to four creatures - Centaurs. Mermaids. Harpies. Manticores. They are created by Chimericists, people whose magical power it is to do so. Chimericist is a Quasi-Path, not a full path in Blood Games 4, so usually one who already has species magic. Chimericists can also use their power to create in utero children of more than one different species, or even of the same sex, so long as one is female to bear the child. They are in great demand for these services.

Each species has 10 Aspects. Two are Extras, four are Quirks, and four are physical descriptors which can be most anything. The Chimericist places the lists beside each other and for the Chimera selects two per success. Example, the Chimericist has 3 successes:

The more successes the Chimericist rolls, the more control they have over the Chimera. The Balance choices can be random, or chosen by the GM, or whatever other method your group prefers. I have included Aspect lists for 24 creatures in the Toolbox!

We finally released Blood Games 4 July 22. Sorry I have not been keeping up! We started in on the Renaissance+ Tool Kit. The simple little bit we came up with for Chimeras - creatures that are composed of between 2 and 4 other creatures smooshed together - in the main book was not robust enough for real use. We have modified the rules for Imbue/Amalgam - how you give some thng the qualities of another - which is a bit more complex but not too much, and a lot more fun!

The reason? One of the Quasi Paths in the Tool Kit is the Chimericist! Not only do they smoosh creatures together, they can make interspecies babies! So all of those who desperately want that half-human/half-dragon hybrid can make one! 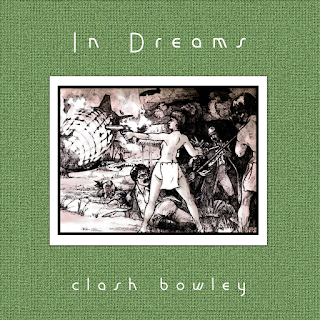 Posted by clash bowley at 1:32 PM No comments:

I am almost ready to release BloodGames 4 - within the week, I think! There are a lot of changes, all, I think, for the better. It is simpler, and easily extensible on the GM and the designer (Klax and I) level. There is no assumption of a particular type of setting, and broad guidelines for creating a setting are given. You can create your own player character creatures, or import other creatures into Blood Games. The bestiary has been completely overhauled. Every creature comes on a single page, with all the information needed to run it on the page. Print it out and go!
Posted by clash bowley at 1:52 PM 1 comment:

Yesterday, I released my ninth album, Dark Orbital. Back in 2016, I released several games, among them StarCluster 4 - Dark Orbital. The new album is a concept piece set in the world of the RPG. The songs show the people of the orbital, and what life was like for them. Hopefully you all find it interesting!
Posted by clash bowley at 9:01 PM 1 comment:

Blood Games 4 is Out for Playtest!

I sent Blood Games 4 out for playtest this week. I have already gotten good feedback from it, so that is excellent! Next up, the Renaissance Toolkit and the Outremer setting! I am playtesting two different setting scenarios, one where magic did not work but is suddenly reappearing, and one where having magic all along created an alternate earth. One thing I am happy about is those people who are different by birth or childhood events are different species, with different species sheets. Here's a sample: 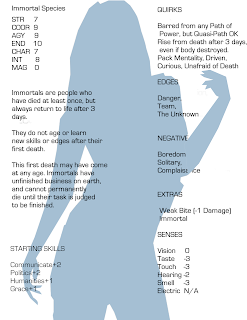 Posted by clash bowley at 8:44 AM No comments:

Blood Games 4 is requiring some SERIOUS changes! All, I think, for the better, but it is taking more time than expected! At every turn, I am unable to just put in what served for Blood Games II as we are trying to make things work consistently, not all as special exceptions to the rule! Klax and I sit down and restructure, say, the Warlock so that it adheres to these principles, and it takes hours to restructure! Also the changes have new and interesting implications! Witches are able to link together and share MAG points now, for example, with the entire coven able to cast mammoth magic spells! It is exciting, interesting, and fun, but fast? Not so much! Be patient, my friends!
Posted by clash bowley at 6:20 PM No comments:

"One of my favorite songs was the opener entitled “I Choose the Sun” which combines distorted, reverb-laced echo guitar with electronic percussion and an overall haunting vibe. It reminded me of the vibe I was hearing on the release Blackstar by David Bowie mixed with elements of Primal Scream."

Compared my music to Bowie's! I can die happy now!

Posted by clash bowley at 2:48 PM No comments:

Released my eighth album, Impact, on Bandcamp today. CD Baby release comes later! Listen to the first track. If you like it, listen to the second. As Blondie almost said, streaming is free!

Posted by clash bowley at 2:09 AM No comments:

We are currently working on the Blood Games 4 Bestiary. We are completely revamping it. I just essentially copied the original bestiary when I came out sith Blood Games II, just tweaking for the new system, so this will be the first complete change. We have changed the presentation, from a listing in paragraph form to a one page complete tool for GMs. The GM can now just copy/print the relevant page complete, and use it as an interface. If you have 4 imps as opponents, just print it out 4 times! Here is an example: 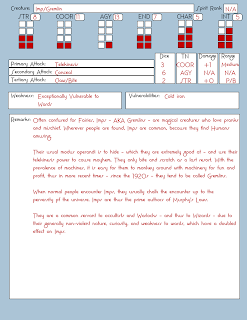 If you compare this with the BGII Imp entry, it has completely changed. We are looking at the sources instead of the BGII listing and putting the result in BG4 form. Note that Spirits are ranked, all attacks have dice, Target Number, damage, and range listed clearly. All Attributes are clearly listed, with damage boxes. Weaknesses are things that particularly harm the creature - doing double damage, or having twice the effect. Vulnerabilities are things that the creature is vulnerable to - such as blessed or silver weapons. The remarks give a full overview of the creature, explaining things in some detail.

Posted by clash bowley at 2:57 PM No comments: