Now I must make my decision on what the 'default' setting is to be in StarCluster 4. StarCluster 3 had no default setting, and people just flailed like Kermit. It needs to be physically fairly small and varied, with lots of adventure potential. It needs to be extensible. It needs both humanoid and non-humanoid aliens.

The Necklace alone is too small. It's a single system with an amazing setting, but there is not enough variation. Otherwise, it would be perfect. I could flesh out the region around the Necklace's star system, and that could be very interesting.

The old StarCluster 2 setting could be revived. It's too big as is, but some small portion of it could be used. It would feel like a retreat though.

I could create a setting specifically for SC4.

Jeshen Space - a setting I created for my IRC game - might be very usable. It has humans as the second species, allied to the Jeshen - an extremely humanoid species, whose apparent similarity to humanity masks a very different evolutionary trail.

Jeshen are almost exclusive carnivores, small, hairless, with a powerful tail they use in swimming, semi aquatic, hermaphroditic, with amazingly good eyesight and slick skin that will not wet. Otherwise, they look very human indeed. It may be parallel evolution, or it may be that they or humans were designed to look like each other by a third party. This would be left open.

In any case, Jeshen Space is mostly surrounded and threatened by space controlled by another alien species, one which detests both human and Jeshen. There have been several wars with this other group, which the Jeshen-Human alliance has so far been able to stave off. There are continual pokes, prods, and 'border incidents' now, though not actual warfare.

I could also include the Necklace into Jeshen Space with very little change...

And a link - a long, difficult link - to human controlled space as well, room for further expansion...

What do you all think?

Posted by clash bowley at 12:58 PM No comments:

Fragments of Air and Stone Released

We've just released Fragments of Air And Stone, a supplement for Volant that covers colonizing and developing Fragments. A Fragment is any floating stone too small to be a proper skyland, and is usually private property. FoAAS covers how to claim a fragment, clear it of monsters, plant a settlement, and modify it so that it is better suited to the use of the Association which owns it. You can dam surface and subterranean rivers, redistribute water through irrigation canals, honeycomb it with passages and living space, create hunting reserves, use cisterns to collect rainwater, place sails to steer it through the air, place shrines and temples, build shipyards, villages, towns and cities, and much, much more! http://www.rpgnow.com/product/158167/Fragments-of-Air-And-Stone
Posted by clash bowley at 6:26 PM No comments:

Finishing Up Fragments of Air and Stone

Volant - Fragments of Air and Stone is just about done. Klax is looking it over, but I think he won't find any showstoppers. If so, it should be available tonight. After this, I will try to find The Outremer Companion. I seem to have mislaid it. If I can't find it, it's off to StarCluster 4 land!
Posted by clash bowley at 8:37 AM No comments:

Just putting the finishing touches on to Fragments of Air and Stone, a supplement for Volant. Fragments are those chunks of floating stone too small to be considered regions. They can be tiny to fairly large, but they are usually owned by Associations, those groups that player characters are members of. Many Associatons base themselves on fragments, and this resource is all about creating and improving them, from creating cisterns on an arid fragment to underground reservoirs, from ranches to irrigation canals, from villages to towns to cities.
Posted by clash bowley at 11:03 PM No comments:

Battle of the Bands for High Strung Released!

High Strung's got an 'adventure'! Battle of the Bands is available as a pdf. It's a one shot, meant to be played in one session, perhaps at a con or over a hangout.

Thanks to +Apocryphal Chris for nudging! 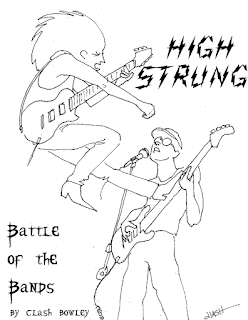 Posted by clash bowley at 10:55 PM No comments:

On 9/8, Merchanters And Stationers escaped into the wild. it's an homage to Cherryh's Alliance/Union/Compact Space novels and stories, and is a free download for use with StarCluster 3 or StarCluster 3 Light (also a free download). I get nothing out of this but ticking off another item on my bucket list.

Posted by clash bowley at 1:13 PM No comments: