In my Sunday IRC StarCluster game - which has been going on since 2003 - the party have mis-jumped from the Cluster they knew (The one from StarCluster 1E & 2E) into a new, unknown set of stars called Jeshen Space. In this place, all humans are descended from one of two slowboats, and have been given worlds by the Jeshen, humanoid aliens who rule this area.

These humans have enslaved their uplifts and bioroids, making them playthings of the rich, and this the party cannot abide. They are attempting to overthrow this society with some muzzy plans. Concurrently, there is a serious threat from the Etvar, another alien people who control the space around Jeshen Space - which has only two really difficult jump routes in and out - and hate humans. The Etvar have begun a long term effort of splitting humans and Jeshen, who are closely allied, by using their music. Fairly simultaneously across Jeshen Space, the companies that control music distribution on the various human worlds began promoting types of music designed to make humans see themselves as disadvantaged next to Jeshen, proud, individualistically heroic, disrespectful of authority, and separatist. If the Etvar can split the Jeshen-Human alliance, they could just walk in and take over.

So the party split, a third of it trying to deal with the music threat, and two thirds combating the slavery issue. The two thirds were split between a couple going in to contact the underworld, and another group - a human with her two Jeshen wives and 'pet' uplifted dog - would be rich tourists, working in contact with the upper class. They took a Sphinx Lines ship there, and first class on the Sphynx Lines has dedicated cabin hosts and hostesses who are sphynx bioroids, created to order. They fell in love with their Sphynx, and bought her contract from Sphynx lines for an exorbitant amount of money.

Thing is, the Sphynx still thinks of them as her Mistresses, for whom she provides necessary and loving services, deriving - as designed - great pleasure from pleasing them; while they have been thinking of her as an independent, free person. They just broke the poor thing. She is deep in a slave - trained, expert, valued, even beloved slave, but slave nonetheless - mindset, and they have to understand it and deal with it before they can free the other slaves. This is not a case of the slaves being downtrodden and cruelly wasted. By all appearances, these slaves are treasured and pampered. The fact that they are still slaves is arousing cognitive dissonance in both the party and the Sphynx.

This is just the way we roll in this game - this is typical stuff. Oh! And the Sphynx is being played by a player as a secondary character, not by me.

Posted by clash bowley at 2:32 PM No comments:

My Wednesday Night IRC game totally rocked. The PCs scared each other to the insanity point. The light wind, moonlight, thick fog, a tunnel, and a black basalt statue became a deadly ghost in their minds. The next day, they finally saw the statue in the light of day and realized they had let their imaginations get the better of them, but it was just wonderful fun! They came this close to hoisting their mounts up a fifty foot wall in order to travel on an ancient ruined road across the badlands rather than take the tunnel built at immense cost for the sole purpose of avoiding the badlands!﻿

I did almost nothing to trick them. This was all their own doing. The sound of the wind across the other end of the tunnel was a low varying moan. That was the only thing I did. The rest was the player characters' doing. They interpreted everything I told them through a supernatural rather than a natural filter.﻿

Posted by clash bowley at 1:57 PM No comments:

Now that The Necklace is out to beta testers, I have started a small project, an alternate setting generator thing for StarCluster 3 which will give results something like Cherryh's Alliance/Union universe rather than something like the old StarCluster 2 universe.﻿
Posted by clash bowley at 1:55 PM No comments:

The Necklace out for Beta Testing Today

I've just sent the first few copies of The Necklace out for Beta Test today. :D
Posted by clash bowley at 11:48 PM No comments:

Here is my latest illo for The Necklace, Golfinho - pencil, gray tones, outline, and flood fill. 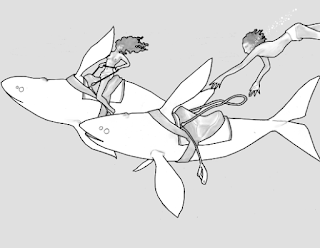 Posted by clash bowley at 1:14 PM No comments: 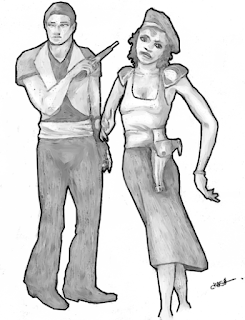 Posted by clash bowley at 12:22 PM No comments: