So I spent hours last night figuring out that the 14 mile by 9 mile floating fragment that the PCs claimed in my Volant/StarCluster 4 - Sabre & World mashup could potentially support a population of 14,400, of which 4200 would be non-farmers.

Posted by clash bowley at 7:31 AM No comments:

Because this was so much fun!

OK! Tonight my Blood Games current story arc ended with the Half Angel 109 feet tall, radiating light and striding through the grounds of Chateau Ile Marie in Normandy, swinging his flaming sword and killing SS guards right and left, scaring Nazis so they pissed their pants, and blinding everyone who didn't run, and stepping on and killing an immortal SS wizard trapped in the metal frame of his sedan chair which had shrunk to two feet square, because the Half-Djinn, who was invisible and in gaseous form shrank it on him, after setting fires in the ammunition of five of the six machine gun Anti-Aircraft batteries, sending rounds cooking off, and the fifty foot long flaming arrow from the giant angel put paid to the sixth as he strode, Wings stretching 200 feet from tip to tip flapping and sending windstorms shrieking through the estate, while in the cellar the blind Hunter staked a vampire and cut off his head, with the Healer and the Mystic helping him with a machete and holy water, and the Witch running through the chateau basement cellblock, invisibly flinging the heavy latches on the doors up so the prisoners could escape.

My players can make an excellent plan, and execute it.

The 100 foot tall angel flew them to England and safety afterward, where they will be trained as operatives to come back, in the spring of 1941. And not 100 feet tall.

Posted by clash bowley at 10:40 PM No comments:

The Wavefront Empire is a lot more rigid than most societies. 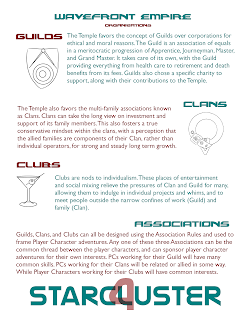 Posted by clash bowley at 11:34 PM No comments:

Star Travel and Causality in The Wavefront Empire

Another bit about the Wavefront Empire: 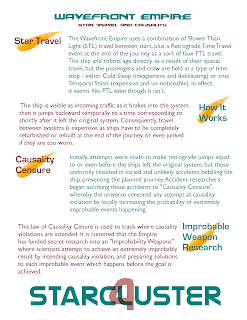 Posted by clash bowley at 11:02 PM No comments:

The Wavefront Empire and the Rebellion Explain their Postions 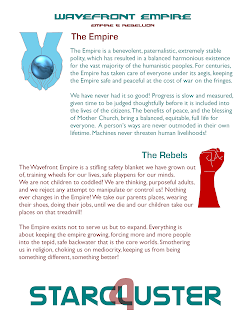 Posted by clash bowley at 11:08 PM No comments:

Last week my Kitbash of Sabre & World and Volant started over Discord, but stopped after an hour, as one of the played got sick. Thursday, we finally got to play a full session, and it went very well! The PCs were flying from LA to the Alaska Panhandle for a vacation in a private amphibian plane. They went into a cloud, and when they came out, a huge chunk of land the size of Connecticut was tearing out of the earth and floating into the sky right in front of/underneath them.

They avoided the crash, saw a woman's body fall out of the sky, got no signal on GPS or radio, and watched as smaller chunks broke off and fell or floated away from the main floating island. They landed on a lake on one of these smaller fragments, about 14 X 9 miles at the widest.

They taxied to shore and out on a beach. Two women riding a giant raven landed after asking permission. The PCs has come into the middle of a three sided war over the main floating island, Three separate sky nations had claimed it, and they were now fighting amongst themselves. They were not speaking English. The PCs stated they were claiming this land. The women accepted it, and they killed a feral cow and brought out the beer keg to celebrate.

A very interesting start. They didn't search for the best fragment, but took the first one they landed on. I didn't expect that. It is the lowest, therefore the hottest, of the major fragments that split off from the main island. I have no idea where this is going. :D

Frank's sketch map of the fragment: 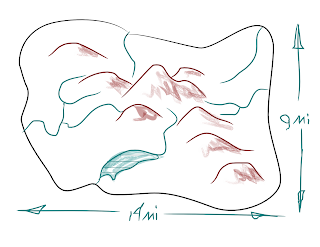 Posted by clash bowley at 11:58 PM No comments: