Just finished this - one of the key bits of technology in the Wavefront Empire! :D 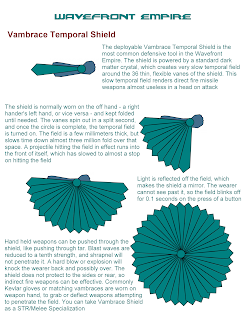 Posted by clash bowley at 12:31 PM No comments:

A New Page for All StarCluster 4 Games Going Forward 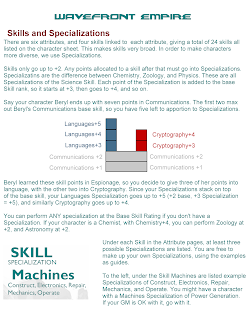 Posted by clash bowley at 11:53 AM No comments:

Wow! Almost the end of may and I haven't posted! I'm working on a lot of projects, and running three games a week... actually two weekly games and two bi-weekly games, but it comes to three a week.

I'm working on a new StarCluster 4 Magazine 4. I'm collecting articles and am more than half way done. I'm also working on a StarCluster 4 Toolbox - Toolbox 6: Psionics. This one should be interesting! I'm still working on StarCluster 4 - Wavefront Empire, so that's coming along! This one has a LOT of new material along with a very different social structure. My next game after Wavefront Empire will be In The Beginning, but I am just blocking that out. I will be releasing it with a Print-N-Play board game to set it up - which will also be available separately! That is, in fact, complete, and I should have it available soon!

My Saturday game is Star Wars-ish - No More Jedi, using a highly modified StarCluster4 system. I have been having a bit of trouble with this because of the way I set it up, and we have just made a big retroactive change that should change everything for the better! This one is set during and after the Last Jedi.

My Sundays have two games, on every other week. One is Roos and Ruins - a StarCluster 4 - Out of the Ruins game about a cheap-ass attempt at exploring a new system before the official expedition. This one has been just spectacular! We even spent three weeks on an improvised murder trial that had everyone on the edge of their seat. Great stuff!

The other Sunday game is The Lucky Break - our ultra-long running game building on things set in motion back in 2003. The main characters from that meta-campaign made a mis-jump into Jeshen Space - where I was testing out StarCluster 4 - Zero Stage. However, they left behind the four girls they rescued and adopted about a decade ago in both real and game time, who were away at college. These girls find a possible reason for the mis-jump, and how to replicate it, then they buy a starship yard and make a ship to follow their "Aunties and Uncle". Also an amazing game! They are now about to make the deliberate mis-jump, hoping to duplicate their family's jump.

On Tuesdays I have been running Sabre & Bird - A group of young Californians fly their plane on a camping trip to the Alaskan Panhandle, and pass into the world of Volant - with its crazy floating islands and monster infested surface. They have claimed a fragment a dozen miles by seven, and are exploring and fighting the monsters that infest it, while planning how to create a new scientifically grounded culture in this world. Tis one has been a blast! We are using the Volant setting along with the Fragments of Air and Stone supplement, and using the StarCluster 4 - Sabre & World modified system, thus with the giant riding birds of Volant, becoming Sabre & Bird. This has been great fun!

There you have it - my excuses for not posting more! That's my story and I'm sticking to it!

Posted by clash bowley at 12:32 AM No comments: