God, I hate that phrase!

I don't want to lead anyone. I hate the idea of people following me. Go do your own thing!

I don't want to follow anyone. I'm perfectly happy doing what I want to do.

I won't get out of your way. I was here first, go around me.

On the other hand, if we are going in the same direction for a while, I would be glad of the company!

Why Are Jeshen and Humans So Alike?

In Jeshen Space, there are three main popularly held opinions for why Jeshen and Humans look so very much alike:

Like a Tasmanian Wolf and a Gray Wolf, the two species evolved to be externally very similar because of similar successful responses to evolutionary pressures, despite their dissimilar origins. Humans and Jeshen just happen to appeal to each other.

Some advanced culture pushed Humans and/or Jeshen to evolve their external similarity in their respective prehistories, for unknown reasons. They were designed to appeal to each other.

Many religious folk believe that god meant for Jeshen and Humans to find joy in each other’s company. They were meant to appeal to each other.

There is no conclusive evidence for any one of these opinions. Most people don’t ever think about it, and just accept it.

I finished the Jeshen Space setting last night - at least to first draft. It runs to 60 pages of information on the Jeshen and Teruvar, some background on Jeshen Space, the ten star systems, and the main worlds in each system. I ran a game in a previous version of this setting over IRC for a year, and it worked very well.

With illustrations and maps, it's a chunk. I'm reasonably happy with it as is, and I am assuming it will only change for the better as the readers comment on this or that aspect.

If you are interested in reading and commenting, please get in touch! :D

Posted by clash bowley at 10:24 AM No comments:

I'm thinking one of the settings I will be releasing for StarCluster 4 is Dark Orbital. Dark Orbital is a repurposed colony ship from earth, a gigantic fusion slow boat which spent centuries already in transit. It has been changed from a colony boat carrying some twenty thousand refugees from earth into a static habitat for millions circling around the star Cry-In-The-Dark.

It has changed a lot - the old living quarters which used spin gravity are all converted to grav plates now, no more coriolis force. The rich still live here - the richer you are, the more towards the outside your "house" is. The richest have private zero-G docks beneath their housees. The spokes are decked over and lots of poor people live in the "flats". Each flat has a mirror flat above it, and you can jump from the highest buildings in one flat to the roofs of the highest buildings in the mirror. Some of the old giant fuel tanks have been converted to grow greenstuff, while others have been converted into water tankage. The gravity profiles follow the inner skin of the tanks, with air in the middle. It's a big thing to go to the beach for a little recreation! Still others are dark and empty, and the poor kids play in them, in zero G.

The cops are corrupt as hell. Everyone knows it and everyone hates them. If you can't avoid them, you pay them off. Different gangs control services. The uplifted Hyenas control garbage collection, for example. Modern medicine is for the wealthy. The free clinics are vehicles to control the poor. Outdated and outmoded medicines and practices are dispensed here. Body Modification is a big cultural thing among the non-wealthy. Only wealthy people look really human.

So this is essentially a cyberpunk dystopia. I'm thinking this would be a lot of fun to play in!﻿

Posted by clash bowley at 10:43 AM No comments:

StarCluster has always had PSI, from the very beginning. In StarCluster 1E through 3E, it was actually required for Jump travel. For SC4 I am making PSI totally optional. I have eliminated PSI-oriented skills, so using PSI means using PSI + a regular skill. For example, use a PSI point plus the skill Communications, and voila! Telepathy! So if you don't want PSI in your universe, it's simple - don't use it. Everything is exactly the same. Ignore PSI points, and have a lovely time.

If you want PSI, though, there are some ground rules. The character can use PSI in as many ways as they have PSI points, and those ways are declared when making the character. So a character with a PSI of 4 might have Telepathy (PSI+Communications), Stun (PSI+Fist), Psychometry (PSI+Humanities), and Suggestion (PSI+Persuade). Note that skill use is limited to two ranks, unless the character specifically takes a Psionic Specialty - i.e. Communications+2 (Specialty Telepathy+4). Also, the character uses PSI points to power the ability, so it is a resource, renewable per session.

Posted by clash bowley at 9:32 AM No comments:

Here's the Human Species page for Jeshen Space. Klax and I created the humans as an alien species with the alien creation tool. For comparison, here is the final version of the Jeshen species sheet. Jeshen are the main species in this setting - thus, y'know, Jeshen Space... :D﻿ 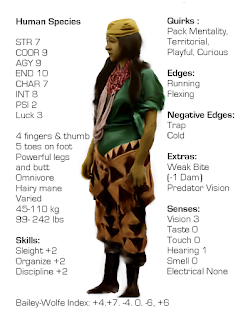 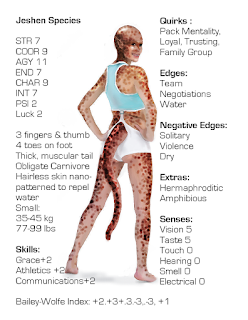 Posted by clash bowley at 6:13 PM No comments:

So, there are three parties of characters in my StarWars-ish: The Next Generation Episode VII game starting Saturday.

Group one is three Stormtroopers who - inspired by Finn and tempted by promises from a prisoner - break away in the immediate aftermath of Poe and Finn's escape from the StarDestroyer. They steal an old Lamda Shuttle and book it away from the First Order, and head to Maz Kanata's place. The prisoner they escape with is a Holovid superstar who is ungodly famous, and is very sympathetic to the Resistance. In fact she held a big fund-raiser for the Resistance, which is why the First order captured her. She knows Maz Kanata, and says it's safe from the First Order.

The second group is two 'street Jedi'. One was a padawan in Luke's disastrous Jedi School, who escaped death but is running and staying low, and the other is a force sensitive who picked up an old light saber and is training herself. They have just arrived on Jakku looking for a Church of The Force which is supposed to be strong in the local villages on Jakku.

The third group is two scions of the old group of StarWars-ish characters, a young wookiee and a younger Twi'lek. They are here on Jakku because they heard about a StarDestroyer having crashed on this desert planet just behind a smaller ship. They think this is because of their parents, having both heard this story growing up, because... yes, it did happen with another star destroyer on another desert planet in our game, long before we heard of Jakku! They want to see this, because they never really believed the story.

The Twi'lek was also an escaped padawan of Luke's School, and yes, she knows the other ex-padawan. I expect groups two and three to merge the first day because of this. :D﻿

Posted by clash bowley at 8:05 PM No comments:

Got a sweet idea for Armor in StarCluster 4! It takes from Klaxon's super's game Look! Up In The Sky! - The systems built into the armor are damage targets! So, you have a Penetration Value, which determines what can even damage this armor, and a Protective Value, basically a few damage boxes intrinsic to the armor - 1 to 8. Every sub-system the armor has is another damage box.

What really rocks here is the player chooses what box to check off, and assigning sub-system hits is making your armor less effective in interesting ways rather than just numbers.

Here's a couple of examples - a Flak Jacket with integrated Comms, and a suit of high tech scout armor.﻿ 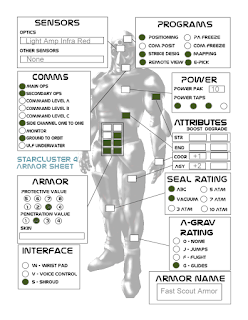 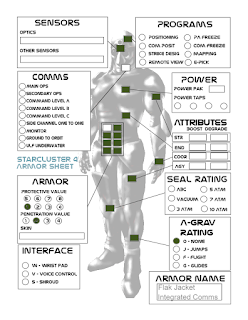 Posted by clash bowley at 6:12 PM No comments:

So Here are my Saturday and Sunday Game Campaigns!

So, we are running Star Wars The Force Awakens using StarCluster 4 on Saturdays! We got three ex-Stormtroopers and a freed prisoner created in one group, and two refugees from Luke's aborted Jedi Academy, and two hard-knocks school "Jedi" in the other. The Stormtroopers took advantage of the mess Poe and Finn created to steal a Lamda class shuttle and get out of Dodge.

In my Sunday group, we decided on going back to In Harm's Way: Napoleonic Naval. The year is 1803, and the United States just purchased Louisiana. Jean and Pierre Lafitte are smuggling and pirating out of Barataria Bay, and things could get interesting.

Posted by clash bowley at 8:28 AM No comments: