Yesterday and this morning were such a blur! I was able to release all three games yesterday on DTRPG/RPGNow, and today on Lulu and PIG. I also ran a game yesterday and another one today. Tired now, but pleased! Now they will fall away into the mists of nothing matters-ness! :D
Posted by clash bowley at 10:35 PM 2 comments:

Announcing the release of StarCluster 4 - Zero Stage at Rpgnow/Drivethru Rpg. This is the first new StarCluster 4 game release. Zero Stage is a SF game set in a ten star system network of stars owned by the Jeshen, in which humans are welcomed refugees.

Also we are releasing a new version of the venerable Cold Space RPG, StarCluster 4 - Cold Space. This is an update of the original Cold Space game released back in 2005, using the new StarCluster 4 ruleset - vastly simplified and re-laid out.

If you bought the original Cold Space from RPGNow/DTRPG, you should have been notified of this update as a free download. Please download it! It should be a much more pleasing experience!

If you have already bought The Necklace in it's old form from RPGNow/DTRPG, this should be a free upgrade - just download it.

The Flats and Mirrors of Dark Orbital

There are four slice-of-pie shaped areas between the spokes of the old wheel. These are called flats. They were one open to space, but are now enclosed with a floor and ceiling, each equipped with A-grav plates. There are buildings on the floor of each flat, and buildings on the ceiling, and people live on both. The A-grav fades out at a 40 meter wide area in between without gravity called the Dead Zone. It is possible to stand on the roof of a building, jump up into the Dead Zone, coast through the Dead Zone, turn around, and land on the roof of a building on the ceiling.

Some people like to fly in the Dead Zone, using cloth wings. The living areas on the ceilings of the flats are called mirrors. Each flat is named, Tors Flats, Spinner Flats, London Flats, and Alkali Flats. Mirror Alkali is the ceiling of Alkali Flats.

The poor live in the flats. The flats are wild, and unpoliced for the most part, and when police come in, they don’t hesitate to use deadly force. Commerce flourishes in the flats, there are several markets in each flat, and everything belongs to somebody. The trash bins, for instance, belong to the Spotted Pack, a family or clan of uplifted hyenas. Everything broken is recycled, fixed, and resold, and the Spotted Pack gets it’s share of the proceeds. Spoiled food never goes to waste. Hyenas can digest virtually anything.﻿ 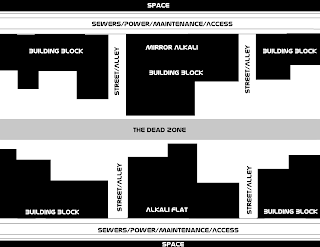 Posted by clash bowley at 1:30 PM No comments:

These implants have no game effect, and the characters can just have them if they want them. There are other implants that have actual game stats and such, but these are just free. Here are a couple examples: AR Game Implant "Mu" This implant consists of a brain interface unit and direct optic connect package. It is for a popular Augmented Reality game called “Mu”. Mu is a conspiracy game, and uses mundane locations and actions as in-game locations and actions. Points are awarded for strange activities, and odd, creepy, and disturbing tasks are given. Rumor is it is all actually real, and that there is some end game that all this actually is supporting. Theme Music This implant plays theme music for you, which changes when you do different activities - the music for walking is different from the music for tense situations, which is different from resting music. The music never stops. You choose the themes from among millions of free public domain songs, or pay for current songs.﻿
Posted by clash bowley at 8:32 AM No comments:

I am really excited! Starting the first of June, I sent out StarCluster 4 Zero Stage for beta test. From the wonderful feedback, I have continually been refining the game - I have actually recompiled the pdf over forty times since 6/1. I want to release it so badly - I mean even though I know it will drop out of sight like a stone dropped into the Atlantic, I'm still really proud of this game! - but I am determined to wait it out a bit more, for hopefully more feedback. In any case, I have converted The Necklace from StarCluster 3 to StarCluster 4, and am working on another new setting, Dark Orbital. The Necklace will not need further playtest - the setting was proved with the original testing, and the system is almost identical to Zero Stage, so I will release it when I release Zero Stage.
Posted by clash bowley at 3:27 PM No comments:

As usual when I get really focused, Pundit doesn't quite know how to approach it, but he is an excellent game reviewer, and pulls it off. :D

Here's a link to the game: http://www.pigames.net/store/product_info.php?cPath=25&products_id=828

Posted by clash bowley at 3:12 PM No comments: