The Imperials in StarCluster 4 - All Out Of Time

Now the Imperials, courtesy of Klaxon. These are a descendant species of humanity, though they consider themselves the only true humans. No one else calls them anything but Imperials. They have been running things in the Wavefront Empire for a long time, but that is all starting to shatter. Now they have to go to the peoples they conquered earlier and convince them to help keep the Empire alive.

Posted by clash bowley at 7:29 PM No comments:

Drug-like Temporal Effects in StarCluster 4 - All Out Of Time

I had an idea. Drug-like Temporal Effects. These would be short term effects created by 'injecting' tailored time crystals. They work through a replacement for PSI - Temporal Affinity or something. I am thinking Norns, and trained non-Norns, would be able to experiment with this directly by injecting the raw material and using Skill+TA. Untrained people can use the commercial DTEs below at the cost of one point of TA per dose. I say 'injecting' but what you are really doing is shining a bright light through the crystal at yourself. It just looks like an injection.

Refresh - Accelerates your aging by one day instantly, refreshing you and healing any damage boxes. Rewind - Allows you to examine your short term memory in great detail. Stop - 1 day stasis, to help in medical emergencies. If - Examine probabilities to predict the future. Time covered is directly proportional to uncertainty. Dredge - Works like Rewind on long term memories, but with the addendum that Long term memories get more mythologized with every passing year. Slow - Speeds perception to slow the passage of time. Does not speed the body, but does acquire many details. You can hurt yourself trying to react to what you can perceive

Posted by clash bowley at 5:18 PM No comments:

Platas in StarCluster 4 - All Out Of Time

Platas are a squat, powerful species. They are preferential swimmers, but can walk easily. Their hands and feet are half-webbed. They are culturally explorers, thrill seekers. They like to find new and interesting things. They have chromatophores in their skins, allowing them to change colors and patterns, which they can use to communicate silently as well as match their backgrounds - or just because it looks cool. 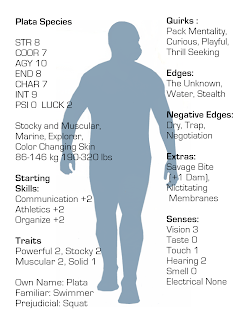 Problem - Because of the way "FTL" works, Military ships sent out would arrive at their destination as fragile ancient ships, no longer up up to military needs. Too many faults, too much corrosion, too many weaknesses. Result - lots of small, local star empires.

The First Emperor had the idea to send out ships which were Mobile Robotic Construction Yards (MeRCY). They would construct a flotilla in transit in the last few years before arrival in the new system, giving them essentially new ships on arrival.

The new empire was called the Wavefront Empire, as it expanded in a wave front from the initial source, the capital. The MeRCYs dropped into their new system, the system was conquered, the MeRCY created a copy of itself and a new force was raised and trained in the capital, and everything was sent off to the next system, where the process was repeated.

The trouble came because the people of the capital were a limited commodity. They were thoroughly indoctrinated in the way of the Empire, but there were only so many of them. Eventually, as the empire expanded, important systems nearer the heart began filling military slots with locals, making them more responsive to local needs than Imperial needs. The assault forces began to be raised in long-conquered back areas of the Empire.

The longer a system was in the Wavefront Empire, the more it was trusted, all things being equal. The more it was trusted, the less brutal the occupying force, and thus the more potential for hidden agencies and corruption. Bits of the Empire began breaking away. Situation now - Empire trying to keep central concepts going, while empire continues to decentralize.

Posted by clash bowley at 6:03 PM No comments:

Phanes in StarCluster 4 - All Out Of Time

Along with the Norns, the Phanes are a species in StarCluster 4 - All Out Of Time. Phanes are a long limbed human-descended people. They are covered in soft, plush fur, and have translucent membranes stretched between their wrists and ankles. They can glide on these membranes like a flying squirrel.

Because of these membranes, wearing clothing is awkward for Phanes. They are - aside from their membranes - covered in fur, so modesty is not a pressing concern. Humans find them very attractive, and in mixed species planets they tend to be actors, models, politicians, and the like, where they have a long leg up.

Posted by clash bowley at 3:20 PM No comments:

Norns in StarCluster 4 - All Out of Time

Here is the Norn Species from StarCLuster 4 - All Out Of Time. Norns are a species descended from humans, but modified to work with time crystals. As time crystals grow very slowly in the dark on rogue planets, far away from any sun, and infused with dark matter, Norns are mostly blind, but have heightened senses of hearing, touch, and smell.

Norns are small and hairless, with large pale eyes. They make things from time crystals they have grown on their dark worlds - temporal shields, "FTL drives", solar sails, and other invaluable mechanisms. They live communally in a swarm, sleeping together in a pile. They have names, and they sometimes live among other people for a while, so they are not helpless without other Norns, but they tend to attach themselves to others, sharing everything with them. 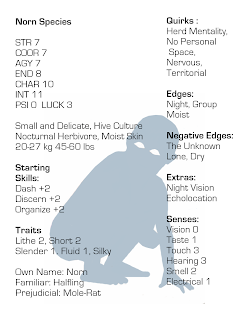 Posted by clash bowley at 5:05 PM No comments:

Some changes in damage apportioning for StarCluster 4 - All Out Of Time. I really liked some aspects of the changes I made specifically for Sabre & Planet, but other aspects of that system would not work as well in other settings, so I combined the standard SC 4 damage-handling system with the one I used in S&W. It has what I think of as the best of both methods, so I will be using it from now on in most new games, and I will be offering it in a Toolbox.

Attached is the upper left corner of the new character sheet. You set it up the same as standard SC4 - take your attribute score (say 11) divide it by two and round up (6) and black out the damage boxes until only that number is open - so for this example of the 8 boxes available, 6 would be left open and two blacked out.

In play, for each point of damage, you check off a damage box until all of the damage boxes for one attribute are checked. Once all the boxes are checked for that attribute, you check the Status box at the end - i.e for STR, the status box is Strained. This means you have stained some muscles, and until you get this fixed, you operate at a Large penalty for any check related to this attribute.

So if you are using the StarPool resolution system, and you have Strained checked, you would lose two dice (the Large penalty for StarPool) for any STR-related skill check.

Damage boxes heal naturally over time, but Status Boxes need medical attention and treatment to heal. You can still use the alternate Attribute Pool or 3 Status box (Hindered/Wounded/Stunned) methods if you prefer them. ﻿

Posted by clash bowley at 12:52 AM No comments:

StarCluster 4 - All Out Of Time

I have begun work on a new StarCluster 4 game, as was broadly hinted in my last post. I'm calling it StarCluster 4 - All Out Of Time, because all the major techs depend on time manipulation, like the STL FTL ship in the last post. Combat uses temporal shields, which are 0.1 micron thick, and slow down 3 million times anything that tries to penetrate them. Bullets bounce off them, and so do lasers as the shields are almost perfectly reflective. But sharp things can be pushed through, like a stick through tar. Hte gaulntleds are worn because you can grab the pointy sticks and push them away with your gauntleted hand.

The shields originate from the off-hand gauntlet,and completely protect from the front, half from the sides, and not at all from behind. Since they are almost perfectly reflective, you can't see through them, which means the user must pulse them off and back on in order to see.

Klaxon and Albert have had a wonderful idea for our next StarCluster incarnation! The interstellar ships have no FTL, and travel under STL - low percentage of c, a hundred years in flight - but the ship is also simultaneously going back in time, so it arrives after that hundred years at about the same time it left the other system.

You leave System A and everyone, crew and passengers, goes under into cold sleep. Next thing you know you are waking, shivering and puking, tended by the non-sapient robots who have run the ship the last 155 years, in system B. The ship is old and dishevelled, dirty in the corners. The owners scrimped on the maintenance bots, and parts of the ship don't work right. Before the ship flies again, it will have to be refurbished - or maybe even junked. The rich guy looks suave and sleek! He and his wives and husband brought their own Stasis pods, and it was blink your eyes in System A, and you are in system B! You wish you could afford the mcguffinite needed to run a stasis pod!

THIS MAKES ME EXCITED TO RUN THIS GAME! :D

Posted by clash bowley at 11:46 PM No comments:

We are having such a good time with our Sabre & World game! The group is trying their hands at tomb robbing. and are right now befuddled by the Wall of Sand. They don't understand why it is there, and because of this, they can't let it go or get past it. They know the Spinner killed half the last party who tried to rob this tomb, and they know kind of where the Spinner is, but they don't have any idea what it is.

Beau is definitely courting Bahama in his slow, shy way. He gave her flowers and stammered something, and blushed at a kiss on the cheek in thanks. Bahama and Cash cheerfully trade insults, and Brett has been thoughtful and kind. It's a really good group!

Posted by clash bowley at 10:44 PM No comments: