I released my seventh album today. It's called Burning Chariot, and is songs written and recorded between November 8 and December 19, 2019. Each album has, I think, been better than the last. Certainly the difference between this one and my first album is gigantic. I continue to evolve and learn.

My previous album, Sextillius, is now available for free streaming on youtube:

And my fourth and fifth albums, Plush Universe and Strange Attractor, were reviewed on Divide and conquer:

So we live in interesting times!

Posted by clash bowley at 4:04 PM No comments:

I created six suits of Mandelorian armor using the In Harm's Way: StarCluster 4 armor sheet. Each one is built form the same stock Mandelorian armor, but each is modified differently - one is geared for enhanced sensory input, one enhances physical attributes, one is heavy armor geared for absorbing damage, one is command armor with enhanced comm, one is designed for enhanced mobility with jet engines, and one is light maneuverable scout armor with camoflage capabilities. These are for the mercenary group who are trying to pass themsleves off as Mandelorians. I hope this is an interesting idea for the players. They may have to draw lots to get their choice! 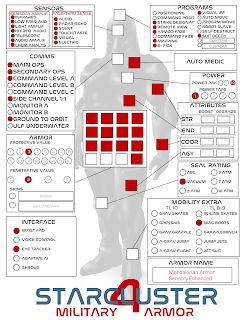