A Kabbalist in Outremer

We are temporarily stopping our StarCluster game to run a game of Outremer. Outremer is set in an alt-universe where the states created by the Crusades lasted into the Renaissance. It is a game where magic is real, and the characters can follow various Paths of Power to learn to control Magic.

One of the Paths is that of the Kabbalist. One of the possible powers of the Kabbalist is the ability to create Golems. In the game, Golems start with a Strength of 18 and an Intelligence of 1. Each month, the Golem's INT increases by 1, but its STR decreases by 1 as well. After 18 months, the now hyper intelligent but pathetically weak Golem dies, unable to raise the strength to breathe, but able mentally to pierce the veil and see the face of God as it died. Most Kabbalists destroy the Golem before this time is up, as a mercy.

One of my players wanted to - as a Kabbalist - be able to change this, so that the Golem could live on longer. I love this! Thing is, as a Kabbalist, he (the character, not the player) would know that the life, the soul which animates the Golem, is not under his control. It is a gift of God. It may be a life quest of the Kabbalist to stop the Golem's rapid change, in which the Kabbalist might succeed once - either to allow the Golem to grow and mature, as in the Galatea myth, or as an immortal repository for the Kabbalist's mind, a kind of Kabbalistic Philosopher's Stone.

Posted by clash bowley at 1:40 PM No comments:

The Jump Route between Jeshen Space and the area dominated by SaVaHuTa is long and tenuous, characterized by dim red dwarf stars, no easily habitable planets, and only a couple space stations to supply fuel. In the Dweomer system is Fae Sidhe - the Fairy Station, and in the Kaleidoscope system is Marche aux Poisson, the Fish Market. Both are remarkable places, and both have a monopoly on fuel - it is quite impossible to traverse the route without stopping at either or both stations.

Fae Sidhe is inhabited by a strange human offshoot of humanity who have genetically modified themselves into their idea of the romantic Fae - high PSI potential, pointed ears, tall and slender, high charisma. They often frequent the station night clubs and bars, attempting to seduce the "Mortals" who come through the station. They seek children for their breeding program, and any stationer by-blow is examined for desirable traits as they grow up on station. They will also examine any child fathered by one of the Fae if it is brought back to the station.

At 18 standard years of age, the child is judged, and either accepted into the Fae, or rejected if not pleasing - too "Mortal" looking, Psi Dull, short, not slender enough. Those rejected are given a short time to beg a ride off the station from any passing ship. If, at the end of that time, if they are still on station, they are sterilized and put to work as "Drabs".

Most of the station is off limits to "Mortals", as they refer to passing ship crew and passengers, and almost nothing is known of the strange life the Fae must live. They are high aesthetes for the most part, paying well for art and music that pleases their odd tastes. Most of the inhabitants of the Fae Sidhe are "Drabs", who own nothing and control nothing, slaves of their Fae families. They are for the most part more human looking than the Fae, but still odd and strongly aesthetic.

The Fish Market is a remarkable place, obsessed with aquaculture to a remarkable degree. All sorts of fish are bred here, and bringing in a new stasis-held fish will earn you the right to sell it in auction. The people of the Fish Market are separated into Houses - kin-based clans - who have a monopoly on certain species of fish.

The Station has enormous free-range "Seas", with specific types of habitat in each, the fish of all Houses together in a suitable environment, such as coral reef, or alpine lake, or cold ocean. You can purchase any kind of fish you like at the Fish Market - the variety is staggering - and the house that owns that species receives a cut of the profits. Restaurants at the station compete in serving rare and choice species to discriminating customers.

The Fish Market station is enormous, with a population in the millions, and does not depend on outsiders buying fish. The fuel supply business alone brings in enough outside credit for their needs, and most of the economy is internal.

Posted by clash bowley at 11:23 AM No comments:

My StarCluster Jeshen Space campaign ended for the nonce, with 3 incipient pregnancies - planned to be decanted simultaneously, although each child will will have a different two of three possible parents - while a 10,000 ton colony supply ship is converted into the Monty Python, a giant flying circus. In order to free humanity from being slavers. truly!

We are switching over to an Outremer campaign next week. I have no idea what they will be doing, or where in Outremer they will be located. They will be putting together an Association before creating characters, though one said he wanted to be a Sufi Dervish, while another was interested in either a Kabbalist - no idea what religion - or a sorceror. ﻿

Posted by clash bowley at 7:37 PM No comments:

I Got A Mashup of Sister Wives and Empire! ﻿

In my Sunday IRC StarCluster game, one of my players' characters decided that it was a good time for getting pregnant, so he/she (currently male, but that's recent, and probably temporary) discussed it with his/her wives, they approved, and they are planning on three - one from each. Two of his/her wives are hermaphroditic alien Jeshen, while the other is a Sphynx bioroid. He/She is not necessarily to be the father, as it's a human/alien/alien/bioroid marriage, and the standard old-fashioned way won't cut the mustard.

Another one, she is a four armed wolf-human hybred pilot/musician, announced she wanted to take a ship and make a Circus - a Flying Circus - with acts from all over on a tour of Jeshen Space, stopping at every inhabited planet. The ship is to be the site of the performances, with several venues within it, and the audience to be flown up from the various worlds the ship is orbiting. What is absolutely scary is this makes complete sense in this campaign! It could be a brilliant stroke if they can pull it off, and they have the money, talent, and contacts to do it.

Posted by clash bowley at 3:33 PM No comments:

So we are playing my son Klaxon's supers game Look! Up In The Sky! AKA LUITS. I'm setting up a Supers High School, in Santa Cosima CA. One thing I want to emulate is the fact that these kids will not be totally able to control their powers. That's why they are going to a Supers High School! This will be effected two ways:

1. If the player voluntarily uses less dice (dice pool game) than the character is entitled to, they get a build point counter for each die.

2. Each player draws a card from a freshly shuffled deck at the start of the session. they can play this card on any other player whenever they want.

*Hearts* lower the TN for success by an amount proportional to the value of the card, to a minimum of 1. The affected player gains a build point.

*Spades* raise the TN for success by an amount proportional to the value of the card, to a maximum of 15. The player giving the card gets a build point.

*Diamonds* give a spectacular success in proportion to the value of the card. The effect can be long lasting and mild, or short and powerful, as described by the card giver. The player giving the card gains a build point.

*Clubs* give disaster in proportion to the value of the card. The effect can be long lasting and mild, or short and powerful, as described by the card giver. The affected player gains a build point.

I think these two mechanics together will make the game feel like adolescents just learning how to control their powers.

Another Resolution Mechanic for StarCluster 4

Here's another Resolution Mechanic page for StarCluster 4. This is for Star100, a mechanic that uses percentiles, but is a bit different from the old StarPerc. This is necessarily a bit wordier than the StarPool mechanic I posted a while ago. What do you think? Is this as clear as the StarPool (d20 dice pool) mechanic?﻿ 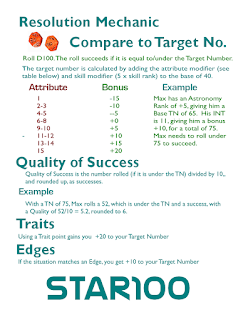 Postcard From My Gaming Groups

Just a post to tell folks where I am with things! I haven't been posting much, as I am sure no one much cares about what I am doing in my game sessions, and I haven't had any big breakthroughs with StarCluster 4. I really need to make up some Template Trees and start playtesting, but right now we are doing some Look! Up In the Sky! supers gaming. LUITS is fast becoming my favorite Supers game because (TADAAAH!) it's so very flexible. We are running pulp level in a made up city called Santa Cosima, which is between Los Angeles and San Diego in California. The Association is based on helping (hidden) aliens settle into the population, and pays for itself by (painlessly) integrating alien tech with current human tech, and taking a percentage of the IP rights. Should be interesting!

My Sunday IRC (StarCluster 3) game is as usual a tangle of soap opera relationships - if soap operas had multiple member marriages with hermaphroditic aliens, that is. One big threat has been nullified, but uplifits, bioroids, and robots remain effectively enslaved on Human worlds within Jeshen Space. The group is wrestling with how to free slaves who are engineered to get pleasure from serving, and thus not want freedom, who are also pampered and indulged in their servitude, even loved, and only belong to the rich as playthings. No "Rise up and shake off your chains!" rhetoric is going to work. Their only chains are in their minds, and are invisible.

My Wednesday IRC group (Vanilla Volant) has succeeded in stopping the Orc army from romping through the almost uninhabited ithsmus, and is now attempting to cut an ally from the main bad guy empire, a nation they had no idea even existed since it grew up where nothing much was before the Great Plague. This will be interesting! There are no guides to what this culture is like, and the party will be walking through a cultural minefield. The carrot they have to dangle is the possibility of trade with their (good guy) empire. The trouble is, the bad guy empire is just over those mountains to the south.