It's Normandy, France, August 1940. The French army has been overrun, and most of France is occupied. Chantal De Marais, a 19 year old girl, has had her mother taken by the SS, leaving her living alone in their cottage. Chantal and her mother are both witches.

In her barn are three young men - Lillac Emmerich, 18 year old Romany; Julius Kanal, a 21 year old ex-Lithuanian soldier; and Francis Chetko, the eldest at 22, a Slovak from Prague.

Lillac escaped Germany with his family to France, but after the fall of France, his siblings were taken by the SS, his mother and the rest of his family killed in their caravan. Lillac is the son of a djinn and a human, and the SS were looking for him.

Julius was in his last year at military college in Kaunas, but when the Soviets invaded, he fled through Germany and into France. Julius and his twin took after their remote ancestor, a full blooded angel.

Francis was also a cadet, but when Czechoslovakia was invaded by Germany, he fought against the invaders and was blinded. The Germans let him go after they captured him, and he too wandered west into France. Francis was a powerful Hunter, raised by a priest to fight the most horrid creatures of the night.

The Villagers know of the three young men in Chantal's barn, and think she is a slut like her mother, who never married. they all know that Chantal is a witch, but they tolerate her because she doesn't curse them or their livestock, and makes charms for them. They also despise the Bosche, and tell them nothing.

Posted by clash bowley at 1:07 AM No comments:

A space ship - for no particular reason

Obviously it's a StarCluster 3 ship with tiny fuel tanks for Matter and Antimatter! 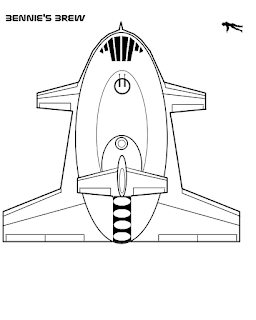 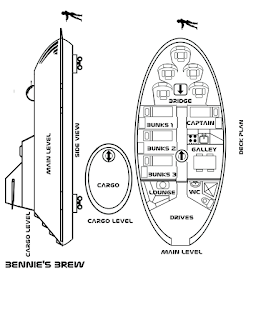 Posted by clash bowley at 12:33 AM No comments: