Danny "Duke" Ducassi is the oldest son of a bastard son of the eighth head of the Ducassi family. The ninth head was his legitimate son, Danny's uncle. Danny's father, a captain in the Family, died saving the life of his half-brother, who didn't know about it as he was lied to. Danny's family has a ring which gives members of his family certain powers. When Danny's uncle died, the ring was passed to his son, Danny's cousin, but the ring rejected him. Danny's family, now headed by his mother, who hates the family, had drifted away into genteel poverty since the father's death, but the Family located him and the ring accepted him as leader. This occasioned the split in the family, which was very recent. Danny's cousin, Donny, heads the half of the Family who now protect Westwood. They are not - as yet - enemies, but rather rivals. The Ducassis are an old - and old-fashioned - Mafia Family. Danny's mother is his "Aunt May", who hates the Family and everything to do with it, and can never learn of Danny's involvement.

The ring is the Ring of the Fires of Life, one of several similar magical rings, though the Ducassis only know of theirs. It is massive, covering the entire first joint of the ring finger, with a huge cabochon ruby crossed by two gold bands in the shape of an "X". At the ends of each of the bands, and in the center, is a shimmering moonstone. It has been handed down in the Ducassi family for over 250 years, since before they arrived in the USA from Italy. No one knows much about it before it arrived in America with Quinto, Dino Ducassi, in the 1880s. The ring is keyed to the head of the Ducassi family, and gives the wearer sharpened intellect, toughens the body, and gives the wearer control over the fires of his own life - the wearer can shoot these fires out of his hands as a weapon, and they can be ridden like a surfboard through the air.

His nickname "Duke" is only used within the family, to help disguise his identity as Danny. As a super, his name is Decimo, for the tenth head of the family. His costume is a typical supers stretch suit, black, with a red D in a white circle on his chest. Over the top, he wears a flowing black trenchcoat. Over his face and head he wears a black tie-on mask, with white lenses, and a black fedora on his head over the mask. 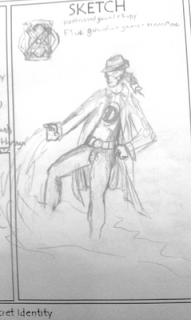