So, I had an idea. I am asking my scientific friends have you ever seen anything like this? It's a different approach to the classic rotating habitation ring for starships. Refer to the following utterly unscaled schematic. Comments would really be amazing, people! :D

The Track Ring contains three maglev tracks on the inside. It is oriented in a plane perpendicular to the thrust, and connected to the ship by cables fore and aft in a cross-braced pattern like a wire car wheel. The fore maglev track contains a single/two train(s) - single if it goes all the way around, double if not, with the trains 180 degrees apart. the train(s) on this track go either clockwise or counter clockwise at a speed calculated to give sufficient centrifugal gravity for sustained healthy living on the floor of the train at a ring diameter of x. The aft track holds an identical set up, with the cars running in the direction opposite to that on the fore track.

The center track holds a small train, the Sync Car. This car is designed to match speeds with either of the other two trains, and lock in with a side air lock, so that passengers can move between the main train and Sync Car at speed. When the passengers are set, the Sync Car slows down and joins airlocks with a spur - the Fixed Station - coming out from the ship just far enough to reach the top of the Sync Car. The Fixed Station is under micro-G (except under thrust) like the rest of the ship, including the Sync Car when it is stationary. The Sync Car would have a left and right airlock, to join with either of the main trains, but the top airlock would be part of the Fixed Station

Note that the Ring should be of sufficient diameter (x) that the coriolis effect will not be too noticeable, and that the Gravity Train cars can be of whatever width and height gives sufficient internal area and volume for living and working space, and may be of more than one level. The two main trains rotate in different directions to counter torque, with the movements of the small Sync Car compensated for as necessary. It would be possible to run the two trains as different shifts, as required.

I came up with the main features of the design, with my writing partner Albert Bailey suggesting the cable bracing. It LOOKS like it should work! It is more flexible and simpler than a hub-and-spoke rotating section, with the airlocks being the biggest wear points, as there are no bearing surfaces. It runs in a vacuum, so there is no air resistance, and would be cold enough to use superconductors for maximum energy efficiency. 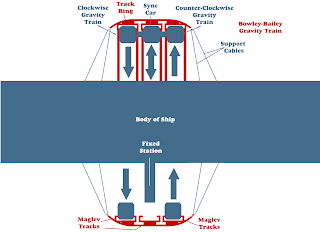